French start-up offers ‘dark web’ compass, but not for everyone 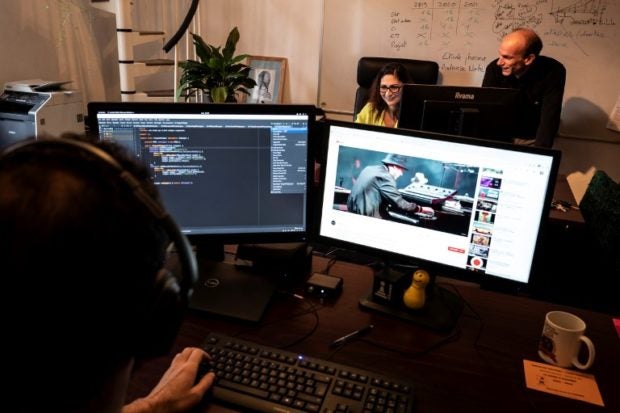 Celine Haeri, co-founder of Aleph Networks, a cyber security company poses, on December 4, 2018 at the company’s headquarters near Villefranche-sur-Saone. AFP

LYON, France — For years criminal websites shrouded in secrecy have thrived beyond the reach of traditional search engines, but a group of French engineers has found a way to navigate this dark web — a tool they don’t want to fall into the wrong hands.

“We insist on this ability to say ‘no’,” Nicolas Hernandez, co-founder and CEO of Aleph Networks, says at the company’s offices near Lyon, in the heart of France’s Beaujolais wine country.

He said Aleph refused 30 to 40 percent of licensing requests for its “Google of the dark web,” based on reviews by its ethics committee and input from its government clients.

Most web users never venture beyond the bounds of sites easily found and accessed with casual web surfing.
But people and sites seeking anonymity can hide behind layers of secrecy using easily available software like Tor or I2P.

These sites can’t be found by searching: instead, users have to type in the exact URL string of often random characters.
In an authoritarian regime, a protest movement could use the secrecy to organise itself or connect with the outside world without fear of discovery.

But the dark web is also ideal for drug and weapon sales, people-smuggling and encrypted chat-room communications by terrorists.

A search for Caesium 137, a radioactive element that could be used to create a “dirty” nuclear bomb, reveals 87 dark web sites, while another page explains how to make explosives or a homemade bazooka.

“Some even advertise the stars they’ve gotten for customer satisfaction,” Hernandez said.

Over the past five years Aleph has indexed 1.4 billion links and 450 million documents across some 140,000 dark web sites.

As of December its software had also found 3.9 million stolen credit card numbers.

“Without a search engine, you can’t have a comprehensive view” of all the hidden sites, Hernandez said.

He and a childhood friend began their adventure by putting their hacking skills to work for free-speech advocates or anti-child abuse campaigners, while holding down day jobs as IT engineers.

Haeri, at the time a teacher, asked for their help in merging blogs by her colleagues opposed to a government reform of the education system.

The result became the basis of their mass data collection and indexing software, and the three created Aleph in 2012.

They initially raised 200,000 euros ($228,000) but had several close calls with bankruptcy before finding a keen client in the French military’s weapon and technology procurement agency.

“They asked us for a demonstration two days after the Charlie Hebdo attack,” Hernandez said, referring to the 2015 massacre of 12 people at the satirical magazine’s Paris offices, later claimed by a branch of Al-Qaeda.

“They were particularly receptive to our pitch which basically said, if you don’t know the territory — which is the case with the dark web — you can’t gain mastery of it,” Haeri added.

The ability to covertly navigate the dark web is a holy grail for security services trying to crack down on illicit trafficking and prevent terror attacks.

The US government’s Defense Advanced Research Projects Agency (DARPA) has been working on a similar project, called Memex, for years.

Aleph plans to soon add artificial intelligence capabilities to its software, which would recognize images such as Kalashnikov rifles or child abuse victims, or alert businesses to potential copyright infringement.

That has attracted the attention of investors as Aleph steps up efforts to add more private-sector buyers to its roster of government clients.

The challenge will be to grow while setting out clear guidelines for handling the thorny ethical questions.
But Hernandez insisted he would remain vigilant, comparing his role to that of the “Protectors of the City” in ancient Greek democracies. /ee