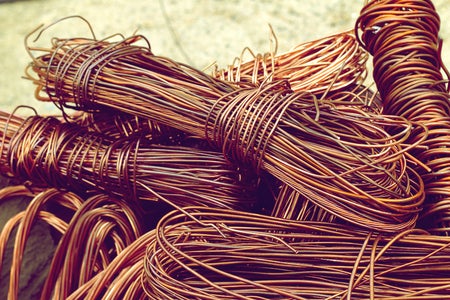 Scientists in China have found a way to turn ordinary copper into a new material with properties “extremely similar” to precious metals such as gold and silver.

The study, which was published in the journal Science Advances on Dec. 1 was lead by professor Sun Jian. The research team from Dalian Institute of Chemical Physics, at the Chinese Academy of Sciences in Liaoning, blasted copper atoms off from a copper target using an electrically charged argon gas.

The displaced atoms were collected in a device to cool down and condense. The scientists discovered they produced a thin layer of sand, with each grain estimated to only be a few nanometers in diameter.

The sand particles were then used as a catalyst to turn coal into alcohol, in a process that only precious metals can perform efficiently. They found out that shooting copper with a large amount of energy makes the produced nanoparticles behave like that of precious metals.

“The copper nanoparticles achieved catalytic performance extremely similar to that of gold or silver,” Sun said, as reported by South China Morning Post on Dec. 22.

Copper, which was not used in place of gold in industrial applications because of the instability of its fewer electrons, can now be used to boost Chinese industries. The method the researchers developed made the copper’s electrons more dense and stable, the report said. The nanoparticles also exhibited properties such as resistance to temperatures, oxidation and erosion.

“The results… proved that after processing, metal copper can transform from ‘chicken’ to ‘phoenix,’” Sun and his colleagues said. “[It’s] like a warrior with golden armor in a battlefield, capable of withstanding any enemy assault.”

While the new method is a significant discovery for China’s economy, the researchers warn that although the new material has a similar weight and look like gold, the nanoparticles cannot be used to make fake gold coins, the report stated. This is because the density of the nanoparticle is still the same as that of ordinary copper. Kate Matriano/JB