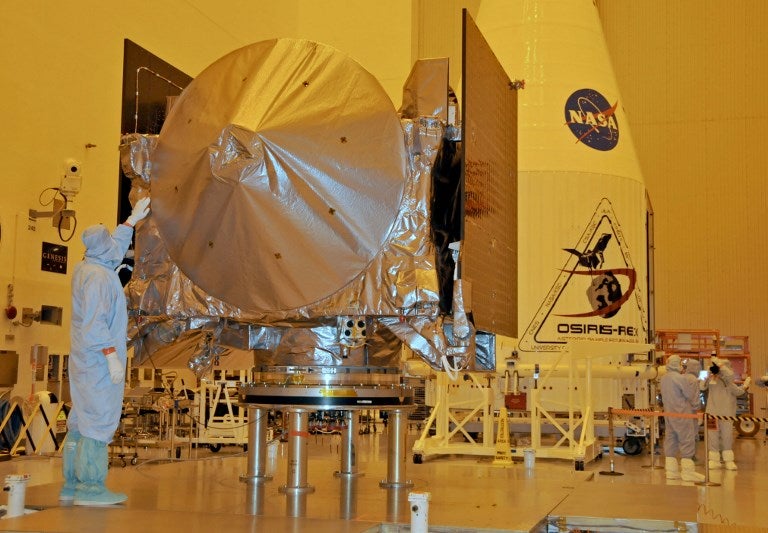 The OSIRIS-REx spacecraft sits on its workstand August 20, 2016, while an engineer checks the protective covering in a servicing building at Kennedy Space Center, Florida. The OSIRIS-REx set a new milestone on Monday, Dec. 31, 2018, in cosmic exploration by entering orbit around an asteroid, Bennu, the smallest object ever to be circled by a human-made spaceship. AFP

Tampa, United States — A NASA spacecraft set a new milestone Monday in cosmic exploration by entering orbit around an asteroid, Bennu, the smallest object ever to be circled by a human-made spaceship.

The spacecraft, called OSIRIS-REx, is the first-ever US mission designed to visit an asteroid and return a sample of its dust back to Earth.

The $800 million unmanned spaceship launched two years ago from Cape Canaveral, Florida and arrived December 3 at its destination, some 70 million miles (110 million kilometers) away.

On Monday, after closely studying the asteroid for several weeks, the spaceship fired its thrusters to bring it into orbit around Bennu at 2:43 pm (1943 GMT).

“Entering orbit around Bennu is an amazing accomplishment that our team has been planning for years,” said Dante Lauretta, OSIRIS-REx principal investigator at the University of Arizona, Tucson.

NASA said the orbit marks “a leap for humankind” because no spacecraft has ever “circled so close to such a small space object — one with barely enough gravity to keep a vehicle in a stable orbit.”

The spacecraft is orbiting Bennu about a mile from its center.

The European Space Agency’s Rosetta spacecraft orbited a comet in May 2016, but at a further distance of about four miles from the center of the comet 67P/Churyumov-Gerasimenko.

Bennu has a gravity force only five-millionths as strong as Earth’s, NASA said.

Each orbit by OSIRIS-REx will take 62 hours.

The plan is for OSIRIS-REx to orbit Bennu through mid-February, using a suite of five scientific instruments to map the asteroid in high resolution to help scientists decide precisely where to sample from.

Then, in 2020, it will reach out with its robotic arm and touch the asteroid in a maneuver Rich Kuhns, OSIRIS-REx program manager with Lockheed Martin Space Systems in Denver, described as a “gentle high-five.”

Using a circular device much like a car’s air filter, and a reverse vacuum to stir up and collect dust, the device aims to grab about two ounces (60 grams) of material from the asteroid’s surface, and return it to Earth in 2023.

A fragment of the early solar system, Bennu is also considered potentially dangerous. It poses a slight risk — a one in 2,700 chance — of colliding with Earth in 2135.

The carbon-rich asteroid was chosen from some 500,000 asteroids in the solar system because it orbits close to Earth’s path around the Sun, is the right size for scientific study, and is one of the oldest asteroids known to NASA.

Scientists hope it will reveal more about the early formation of the solar system, as well as how to find precious resources like metals and water in asteroids. /cbb