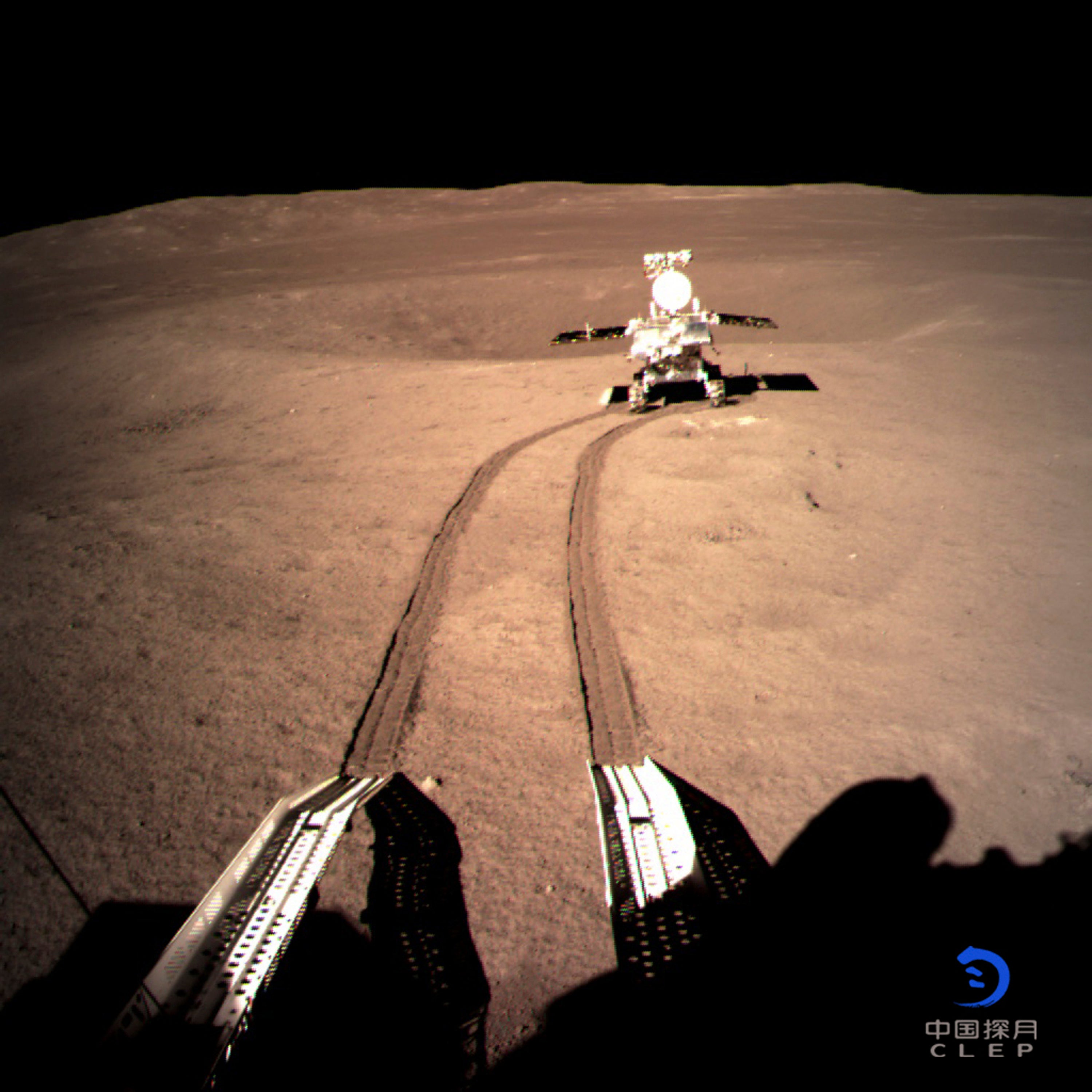 In this photo provided on Jan. 4, 2019, by China National Space Administration via Xinhua News Agency, Yutu-2, China’s lunar rover, leaves wheel marks after leaving the lander that touched down on the surface of the far side of the moon. China’s space agency says that all systems are go for its spacecraft and rover that have made a pioneering landing on the far side of the moon. (China National Space Administration/Xinhua News Agency via AP)

BEIJING  — All systems are go as a Chinese spacecraft and rover power up their observation equipment after making a first-ever landing on the far side of the moon, the Chinese National Space Administration said.

The Jade Rabbit 2 rover has succeeded in establishing a digital transmission link with a relay satellite that sends data back to the Beijing control center, the space agency said in a posting late Friday on its website.

The rover’s radar and panoramic camera have been activated and are working normally, it said. A photo released by the agency showed the rover stopped at a point not far from where the Chang’e 4 spacecraft touched down Thursday.

Chang’e 4, named after a Chinese moon goddess, is the first craft to make a soft landing on the moon’s far side, which faces away from Earth. Previous landings, including one by China’s Chang’e 3 in 2013, have been on the near side.

After sending the rover off from a ramp, the spacecraft deployed three 5-meter (16-foot) low-frequency radio antennas, the Chinese space agency said. Chang’e 4 also has sent back images taken with a topographical camera.

Researchers hope that low-frequency observations of the cosmos from the far side, where radio signals from Earth are blocked by the moon, will help scientists learn more about the early days of the solar system and even the birth of the universe’s first stars.

Harvard University astronomer Avi Loeb noted, however, that the relay satellite needed to send back information from the far side also contaminates the sky.

“As long as we keep it clean of radio interference, the far side of the moon is very good for radio astronomy,” he said.

The far side has been observed many times from lunar orbits, but never explored on the surface. It is popularly called the “dark side” because it can’t be seen from Earth and is relatively unknown, not because it lacks sunlight.

“It’s just the far side, it can be either dark or light,” Loeb said, depending on the time of day.

The pioneering landing highlights China’s ambitions to rival the U.S., Russia and Europe in space. Both China’s space community and public have taken pride in the accomplishment, with some drawing comparisons to the United States.

China’s space program lags America’s, but has made great strides in the past 15 years, including manned flights and a space laboratory that is seen as a precursor to plans for a space station.  /muf