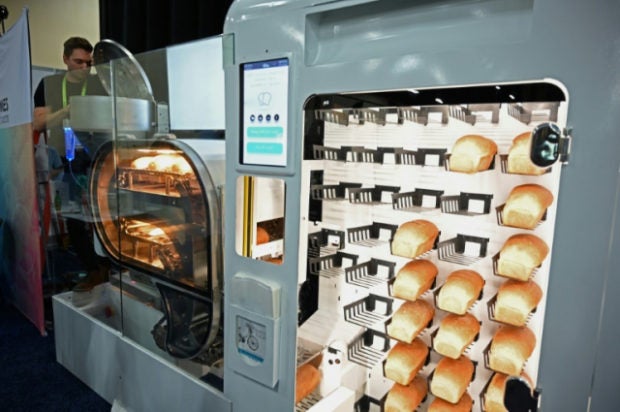 The BreadBot — a fully automated bread-making machine that mixes, kneads, proofs, bakes and sells bread like a vending machine is displayed at CES Unveiled, the preview event for the 2019 Consumer Electronics Show. Image: AFP/Robyn Beck

The robot bread maker came to Las Vegas this week, aiming to bring some freshness to a sector that may be ready for disruption.

Wilkinson Baking Company unveiled its BreadBot at the Consumer Electronics Show, a machine that mixes and bakes up to 235 loaves a day.

Chief executive Randall Wilkinson said the device can lower costs and produce fresher breads than are available in most American supermarkets.

“Consumers want the freshest thing possible, but when they go into the store they don’t know when that bread was baked,” said Wilkinson, a member of the family-owned firm in Walla Walla, Washington.

Wilkinson said the machine, which takes up as much room as a mid-sized car, has more automation technology than bread factories, and can produce at a far lower cost.

He noted that using in-store robotic machines could eliminate the need for truck delivery, which accounts for as much as 45 percent of the cost of most bread.

This means profits could get a rise.

The company is in talks with major supermarket chains and also plans to deliver the robots to the US military for making buns on carrier fleets, Wilkinson said.

The bread robot — which was at a startup showcase Sunday and will be on the show floor from Tuesday — joins a line of devices aimed at disrupting the food industry, including pizza-making robots and robotic baristas.

The current generation of BreadBot is designed for standard kinds of loaves but Wilkinson said the robots can be adapted for customized breads, even French baguettes.

“At some point you will be able to order a special loaf on your phone — you can add sunflower seeds, use less salt or whatever — and pick it up in an hour,” he said. CC