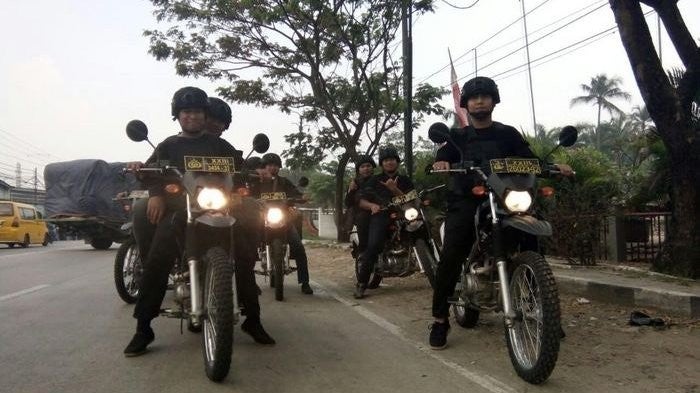 The Tangerang Police sit astride their motorcycles as they prepare to tackle street crimes ahead of the 2018 Asian Games in this file photo. Photo from wartakota.tribunnews.com via The Jakarta Post

JAKARTA — An alleged motorcycle thief was arrested in Kembangan, West Jakarta, last Friday after trying to sell the vehicle on Facebook.

The victim was riding his motorcycle when the two suspects allegedly pulled up alongside him on their own bike and intimidated him into pulling over.

“MAS told the victim to stop and then hit him with a hat,” Handono said on Sunday, adding that the suspects allegedly forced the victim into an alley and threatened to kill him.

They reportedly gestured in a way with their hands that made the victim believe they were armed with a gun.

MAS was arrested on Friday night in a convenience store in Kembangan, while JY remains at large.

The victim’s parent discovered the post and quickly filed a police report.