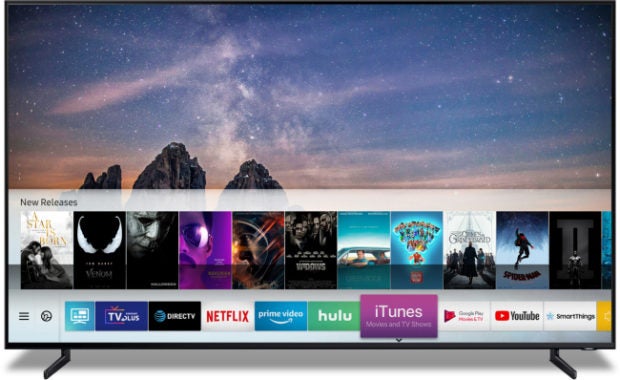 Samsung Electronics announced that it will equip its Samsung Smart TV with Apple’s iTunes Movie and TV shows app and AirPlay 2, at the Consumer Electronics Show 2019 in Las Vegas, Sunday. This is the first time a smart TV would have both iTunes and AirPlay. Yonhap via The Korea Herald/Asia News Network

LAS VEGAS — Samsung Electronics’ Smart TVs will ultimately have multiple built-in artificial intelligence platforms of its competitors in order to provide as many choices as possible for its global customers, said the company’s TV business executive on Monday.

The remarks came on the heels of Samsung’s announcement that it will partner with Google, Amazon and Apple to launch Smart TVs that are even inclusive of services provided by its archrival Apple, such as its new video-streaming service, iTunes Movies and TV Shows.

“Ultimately, Samsung Smart TVs will have embedded (or built-in) Google Assistant and Alexa along with Bixby,” said Chu Jong-suk, executive vice president of marketing for visual display at Samsung, at an annual media event for new TVs in Las Vegas, a day before the opening of the Consumer Electronics Show 2019.

Chu was answering to questions by The Korea Herald about the significance of Samsung’s latest announcement of partnership with the three in the mobile and AI market.

“At the current level, Samsung’s Smart TV models will physically work with the separate Google Home and Amazon Echo AI speakers, but later the AI platforms will be embedded in Samsung TVs,” Chu said. “Eventually, those AI speakers would disappear.”

Samsung Electronics’ decision to include other AI platforms that rival Samsung’s Bixby was interpreted as the company’s acknowledgement of the limits faced by Bixby’s English version in its global expansion, as it was being outperformed by Google Assistant and Alexa.

The South Korean TV manufacturer said Monday it will offer Apple’s new video-streaming service, iTunes Movies and TV Shows, as well as the second edition of media-streaming service AirPlay, on all 2019 Samsung Smart TV models starting this spring in more than 100 countries.

Once the new iTunes Movies and TV Shows app becomes available on Samsung Smart TVs, customers will be able to access their iTunes libraries and browse the iTunes Store to buy or rent from a selection of hundreds of thousands of movies and TV episodes — including the largest selection of 4K HDR movies.

iTunes Movies and TV Shows will work seamlessly with Samsung’s Smart TV Services, such as Universal Guide, the New Bixby and Search, in an effort to create a consistent experience across Samsung’s platform.

With AirPlay 2 support, Samsung customers will be able to play videos, photos, music, podcasts and more from Apple devices directly on Samsung Smart TVs, including QLED 4K and 8K TVs, The Frame and Serif lifestyle TVs, as well as other Samsung UHD and HD models.

Explaining that the proposal to collaborate came from Samsung, Chu said that from Apple’s perspective, Samsung’s sales of some 45 million TV sets a year could have been a selling point.

“We forged a strategic and exclusive partnership for synergy.”

To the question of expanding partnership with Apple — for example, embedding its voice assistant Siri in the TVs — the executive said such a plan is not being considered at the moment.

“The partnership with Apple is an example of these efforts, (in the hope that) Samsung TV owners and iOS device users will enjoy greater convenience and richer experiences.”

Samsung also mentioned that its 2019 Smart TVs will be compatible with Google’s AI speaker Google Home and Amazon’s Echo.

Eddy Cue, senior vice president of internet software and services at Apple, said, “We look forward to bringing the iTunes and AirPlay 2 experience to even more customers around the world through Samsung Smart TVs, so iPhone, iPad and Mac users have yet another way to enjoy all their favorite content on the biggest screen in their home.”

Also at the media event, Samsung introduced a new 75-inch Micro LED screen and a 219-inch The Wall display, ahead of the CES 2019.

Compared with last year’s 146-inch Micro LED model, the gap between the microscopic LED chips has been narrowed fourfold due to technical advancements in the ultrafine pitch semiconductor packaging process, the company said, enabling 4K picture quality in a smaller and more home-friendly form.

“Our Micro LED technology is at the forefront of the next screen revolution with intelligent, customizable displays that excel in every performance category,” said Han Jong-hee, president of visual displays at Samsung.

Regarding the partnership with Apple, Han said, “It is a win-win situation for Samsung and Apple, which also provides merits for consumers.”