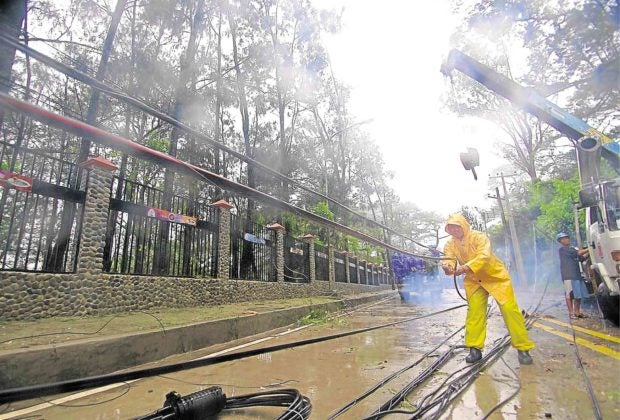 STORM OPS Workers of Benguet Electric Cooperative are on alert whenever storms hit the Cordillera region, ready to restore electricity as power lines are snapped by strong wind.
—RICHARD BALONGLONG

The Department of Information and Communications Technology (DICT) on Tuesday signed a memorandum of agreement (MOA) with the Benguet Electric Cooperative Inc. (Beneco) for the use of its fiber optic network as digital transmission lines.

The MOA will enforce a national broadband plan to bring social services to remote areas through the internet, according to DICT Undersecretary Denis Villorente.

Beneco has over 200 kilometers of fiber optic cable lines, which allow it to remotely access, control and manage its electricity distribution stations in 13 Benguet towns.

Beneco is also preparing to read meters remotely through the fiber optic system.

By using the existing infrastructure, DICT and other agencies can connect digitally with local governments and open programs for communities, which are difficult to reach because of terrain, such as in the Cordillera, Villorente said.

Earlier, the National Grid Corporation of the Philippines and the National Transmission Corporation loaned their underutilized or unused fiber optic cable networks to the DICT to implement the broadband plan, said DICT Assistant Secretary Alan Silor.

The weather station has been transmitting data much faster to allow disaster management teams to plan for potential storms, Villorente said.

DICT has granted Beneco with 1,000 Mbps (megabits per second), the downloading or uploading speed it is now able to access.

The government is prepared to partner with 29 other power utilities with fiber optic networks, said Deputy Administrator Rossan Rosero-Lee of the National Electrification Administration.

Eventually, all 121 electric cooperatives would be “instrumental to bringing the internet to the farthest areas in the countryside,” she said.

Villorente said establishing a digital network comes hand-in-hand with other features of e-governance, such as the national ID system that would start this year.

Del Mundo said using electric cooperatives to bring the internet to outlying provinces was linked to the notion that electricity was one of the most important human rights.

“One of the first [United Nations] declarations is that access to electricity is a human right [because] it improves the quality of life and is the development backbone for all countries,” he said.

“Beneco [and other electric cooperatives] will now ensure that everybody will have access to the internet,” he said. —Vincent Cabreza