Robot recreates the walk of a 290-million-year-old creature 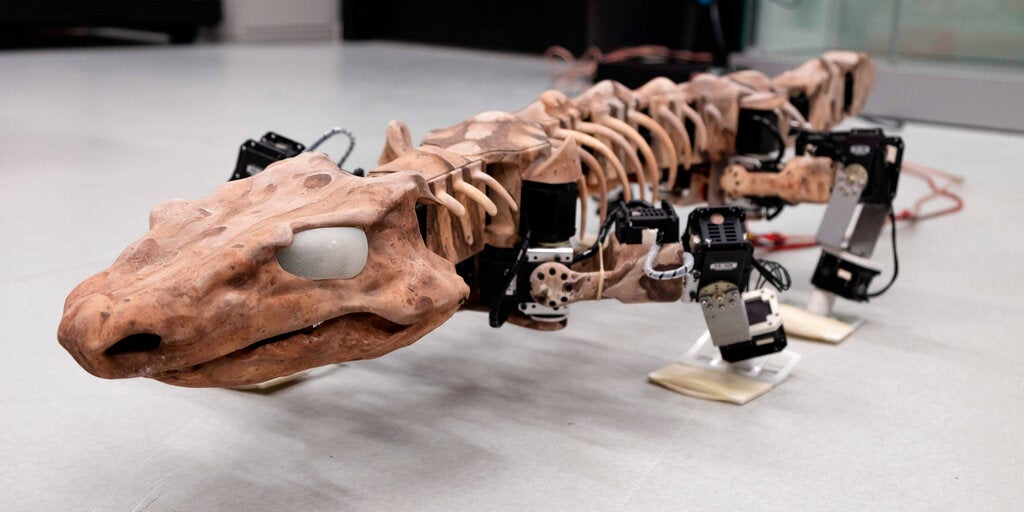 This undated photo provided by researchers in January 2019 shows the OroBOT, based on an Orobates Pabsti fossil. Scientists have used a nearly 300-million-year old skeleton and preserved ancient footprints to create the moving robot model of prehistoric life. (Tomislav Horvat, Kamilo Melo/EPFL Lausanne via AP)

WASHINGTON  — How did the earliest land animals move? Scientists have used a nearly 300-million-year old fossil skeleton and preserved ancient footprints to create a moving robot model of prehistoric life.

Evolutionary biologist John Nyakatura at Humboldt University in Berlin has spent years studying a 290-million-year-old fossil dug up in central Germany’s Bromacker quarry in 2000. The four-legged plant-eater lived before the dinosaurs and fascinates scientists “because of its position on the tree of life,” said Nyakatura. Researchers believe the creature is a “stem amniote” — an early land-dwelling animal that later evolved into modern mammals, birds and reptiles. 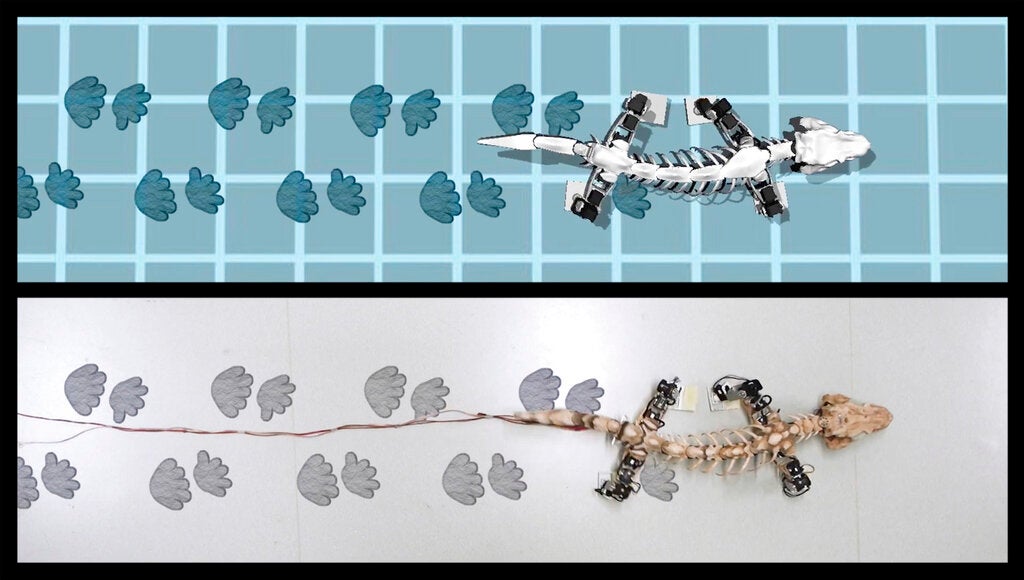 This image from video provided by John Nyakatura in January 2019 shows computer-generated and robotic simulations of an Orobates Pabsti dinosaur’s footprints while walking. Nyakatura has spent years studying the four-legged plant-eater, which lived before the dinosaurs, and fascinates scientists “because of its position on the tree of life.”. Researchers believe the creature is a “stem amniote” _ a likely ancestor of several groups of land-dwelling animals that later differentiated into modern mammals, birds and reptiles. (John Nyakatura/Humboldt University via AP)

Nyakatura teamed up with robotics expert Kamilo Melo at the Swiss Federal Institute of Technology in Lausanne to develop a model of how the creature moved. Their results were published Wednesday in the journal Nature.

The researchers built a life-size replica of the prehistoric beast — “we carefully modeled each and every bone,” said Nyakatura — and then tested the motion in various ways that would lead its gait to match the ancient tracks, ruling out combinations that were not anatomically possible.

They repeated the exercise with a slightly-scaled up robot version , which they called OroBOT. The robot is made of motors connected by 3D-printed plastic and steel parts. The model “helps us to test real-world dynamics, to account for gravity and friction,” said Melo. The team also compared their models to living animals, including salamanders and iguanas.

Technology such as robotics, computer modeling and CT scans are transforming paleontology, “giving us ever more compelling reconstructions of the past,” said Andrew Farke, curator at the Raymond M. Alf Museum of Paleontology in Claremont, California, who was not involved in the study.

Based on the robot model, the scientists said they think the creature had more advanced locomotion than previously thought for such an early land animal. (Think more scampering than slithering.)

“It walked with a fairly upright posture,” said Melo. “It didn’t drag its belly or tail.”

University of Maryland paleontologist Thomas R. Holtz, who was not involved in the study, said the research suggests “an upright stance goes further back than we originally thought.”

Stuart Sumida, a paleontologist at California State University in San Bernardino and part of the initial team that excavated Orobates fossils, called it “an exciting study.” Sumida, who was not involved in the robot project, said the work provided “a much more confident window in to what happened long ago. It isn’t a time machine, but Nyakatura and colleagues have given us a tantalizing peek.”  /muf