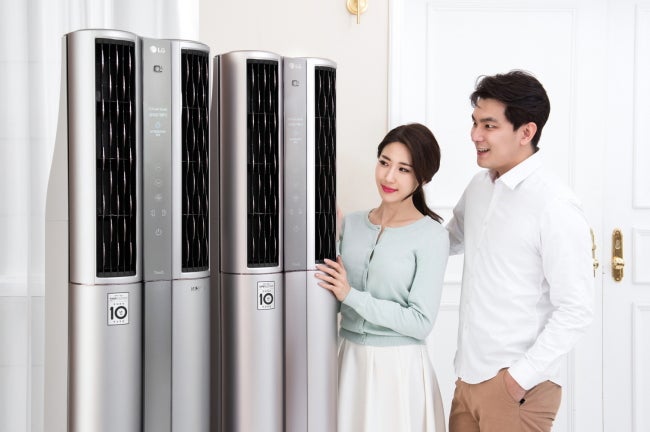 Yonhap via The Korea Herald

It also allows users to control other Samsung appliances connected via Wi-Fi, such as wall-mounted air conditioners, air purifiers and TVs, the company said.

“The new wind-free air conditioners based on AI technology upgraded the air purification function and presents a cool design,” Lee Jae-hwan, a senior official at Samsung’s consumer electronics division, said during a media event. “We will step up efforts to develop the air care technologies to help consumers better withstand heat waves and fine dust.”

The company also said its sleek design will seamlessly blend with the interior design to cater to discerning consumers.

Samsung’s new air conditioners will be available beginning next Thursday.

The 2019 models improved air purifying filters to address growing concerns of fine dust that chokes South Korea in the springtime, and sometimes even in winter, the company said.

The Whisen ThinQ air conditioners based on “interactive AI” technology allow users to cool or purify their houses with nothing more than their voice, it noted.

LG says the smart cooling devices are more energy efficient, allow users to check outside weather and pollution conditions, and can connect to other home assistants.