Microsoft co-founder and philanthropist Bill Gates proved that being a billionaire does not exempt him from falling in line to grab a burger at a fast food joint in Washington, United States.

A picture of Gates wearing a maroon long-sleeve shirt, black pants and shoes while standing in line at Seattle-based fast food chain Dick’s Drive-In, was posted by Microsoft alumnus Mike Galos via Facebook on Jan. 15.

Galos then took a swipe at President Donald Trump: “This is how real rich people behave unlike the gold toilet seat wannabe poser in the White House.”

In the comments section of his post, Galos explained that he only posted the photo but that it was taken by another Microsoft alumnus on Jan. 13. The unnamed ex-employee shared the photo to a closed Microsoft alumni board. Galos also said he often runs into Gates at another local burger chain which the billionaire frequents. 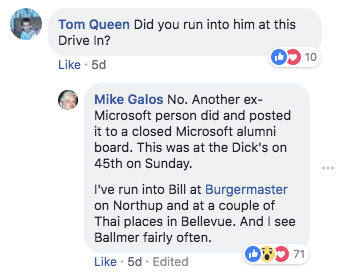 “Do you know if he reacted, or if he knew his picture was being taken?” one commenter asked. Galos replied: “No idea. Bill’s not big on attention but is generally friendly and understands he’s a bit of a celebrity. ” 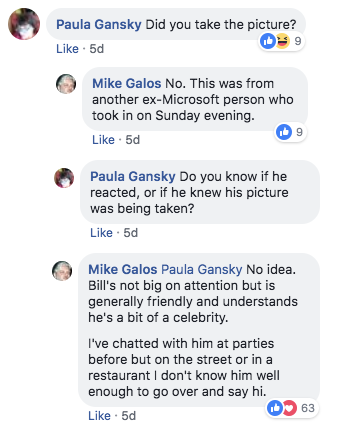 In response to Galos’ criticism of Trump, one netizen, Eileen Prager Perry Schwartz, suggested Gates run for the presidency. “I think he’d consider it a demotion from running the foundation,” was Galos’ reply. 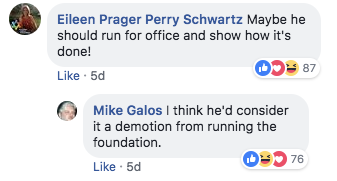 Other netizens took to the comments section to express their admiration for the billionaire.

Another netizen, Jody Allan Dobis, compared Gates to a former U.S. president, also known for his modesty and philanthropy.

“The Jimmy Carter of CEO’s,” stated the netizen. JB