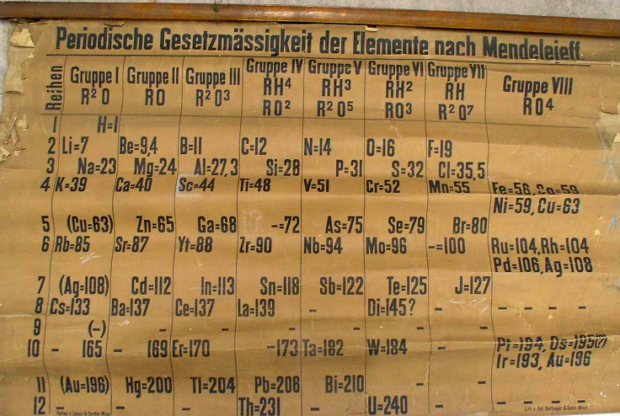 A periodic table from 1885 was found in the storage area of the University of St. Andrews’ School of Chemistry, suggesting it may be the oldest surviving periodic table in the world.

The revelation was made by the university through its official website on Jan. 17, Thursday. The periodic table was discovered by Dr. Alan Aitken during a storage clear out last 2014. The storage, then, was filled with laboratory equipment and paraphernalia that grew over the years since the department’s opening in 1968.

The periodic table was described as “extremely fragile” and “flaked upon handling.” It looked similar, but not quite identical, to the second periodic table Dmitri Mendeleev formulated in 1871. The university, however, said that it was clearly an early specimen.

“The discovery of the world’s oldest classroom periodic table at the University of St. Andrews is remarkable,” expressed professor David O’Hagan, ex-head of Chemistry in the university.

“The table will be available for research and display at the University and we have a number of events planned in 2019, which has been designated international year of the periodic table by the United Nations, to coincide with the 150th anniversary of the table’s creation by Dmitri Mendeleev,” added O’Hagan.

The periodic table was annotated in German and an inscription at the bottom, “Verlag v. Lenoir & Forster, Wien,” revealed a scientific a printer that operated in Vienna between the years 1875 to 1888. Meanwhile, another inscription, “Lith. von Ant. Hartinger & Sohn, Wien,” identified the chart’s lithographer who passed away in 1890.

“This table appears to be the only surviving one from this period across Europe,” the university stated. “The University is keen to know if there are others out there that are close in age or even predate the St. Andrews table.”

The University’s Special Collections has since been awarded a funding grant by the National Manuscripts Conservation Trust (NCMT) in the hopes of preserving the delicate chart for posterity. A full-size replica of the discovered periodic table was also produced and is now on view in the School of Chemistry.

“We are delighted that we now know when the oldest known periodic table chart came to St. Andrews to be used in teaching…” Gabriel Sewell, head of Special Collections, was quoted as saying. “We look forward to making it accessible to all.” JB