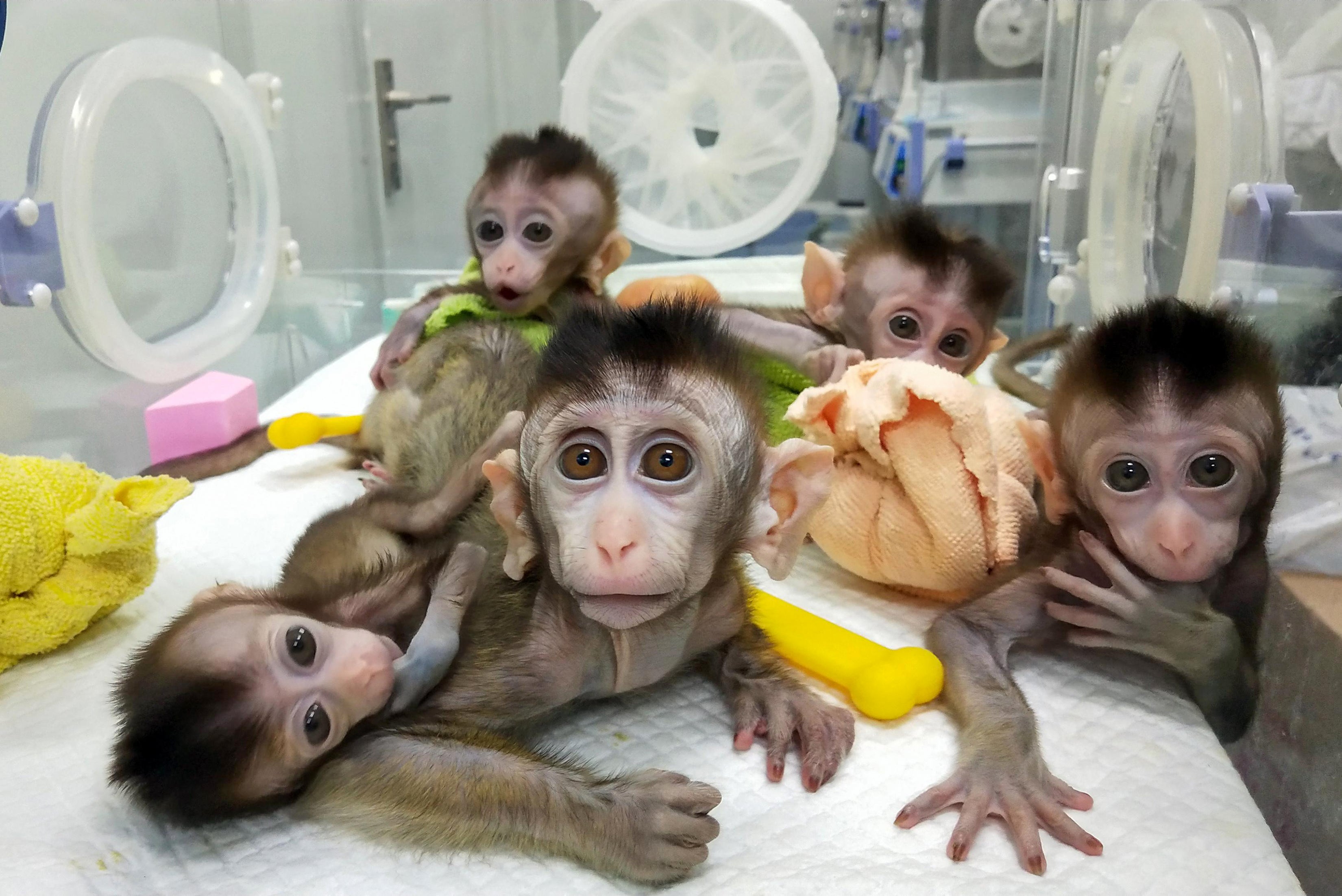 This picture taken on November 26, 2018 and released on January 24, 2019 by the Chinese Academy of Sciences Institute of Neuroscience via CNS shows five cloned macaques at a research institution near Shanghai. – Chinese scientists announced on January 24, 2019 they had cloned five monkeys from a single animal that was genetically engineered to have a sleep disorder, saying it could aid research into human psychological problems. (Photo by STR / various sources / AFP) / China OUT

SHANGHAI — Chinese scientists announced Thursday they had cloned five monkeys from a single animal that was genetically engineered to have a sleep disorder, saying it could aid research into human psychological problems.

The claim, detailed in two reports published in a Chinese science journal, is the latest in a series of biomedical advances in the country, some of which have fueled medical ethics debates.

Most recently a Chinese scientist claimed last year he had altered the DNA of babies to make them HIV-proof.

A research team from the Institute of Neuroscience at the Chinese Academy of Sciences in Shanghai said it had altered the genes of a macaque to give it circadian rhythm disorder, in which the body’s “clock” is out of sync with normal sleep times.

They went on to clone five macaques from that individual, and found that the new monkeys — born over the past six months — show signs of mental problems associated with sleep disorders including depression, anxiety and behaviors linked to schizophrenia.

The findings, published Thursday in the English-language journal National Science Review, were hailed as a world first by Chinese media.

The report’s authors said the findings could aid research into human psychological illnesses because scientists would be able to create animals with specific disorders.

Poo Muming, the director of the neuroscience institute and the study’s co-author, told state media the research team would seek to clone more monkeys with different brain disorders in hopes that future experiments on them could yield new drugs or treatment.

He said this could also reduce the overall numbers of healthy macaques that are subjected to experiments around the world, in a boost for animal welfare.

The method was the same used to produce the celebrated sheep “Dolly” more than 20 years ago.

Other species were subsequently cloned via the method over the years but primates had until last year proven difficult to clone and the team’s achievement was hailed as a breakthrough.

But such advancements often stir controversy.

Chinese researcher He Jiankui shocked the scientific community after revealing that he had successfully gene-edited twin girls born in November to prevent them from contracting HIV.

He now faces a police investigation and has been dismissed from his position at the Southern University of Science and Technology in Shenzhen. /muf