China appeals to US to accept its technology progress 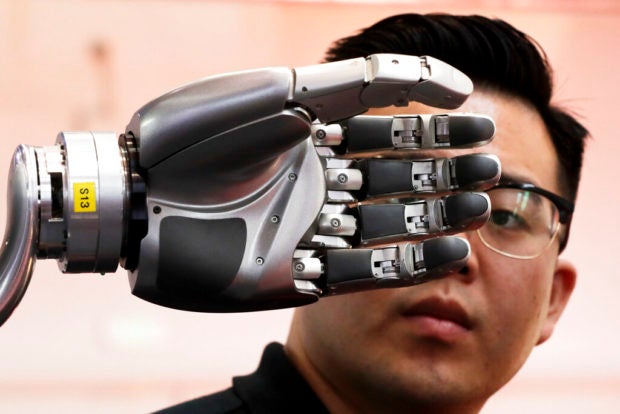 In this Aug. 23, 2017 file photo, a visitor looks at a robotic hand powered by Kinfinity Glove, developed by the German Aerospace Center, on display at the World Robot Conference at the Yichuang International Conference and Exhibition Centre in Beijing.  AP

BEIJING  — China urged Washington on Thursday to accept its industrial development after US intelligence officials said Beijing steals or copies foreign technology, as the two sides prepared for another day of talks aimed at ending a tariff war over Beijing’s technology ambitions.

On Wednesday, US intelligence officials told Congress that China is the biggest commercial and military threat to the United States. A separate report this week said Beijing will steal or copy technologies it cannot make itself.

“The United States is the world’s top power in terms of technology, we acknowledge that,” Geng said. “But we hope that the US can see the scientific and technological progress of other countries with an open and inclusive attitude. It must allow others to make progress while developing itself.”

On Monday, China’s biggest technology company, Huawei, was indicted on U.S. charges including technology theft.
The US has objected to Chinese plans for state-led development of advanced technologies that American officials say violate Beijing’s market-opening commitments.

President Donald Trump wants to see a rapid decline in the chronic US trade deficit that could be difficult to achieve without fundamental changes to China’s approach to developing its economy and lifting living standards for its 1.4 billion people.

The negotiators meeting in Washington face a March 2 deadline: the Trump administration is scheduled to escalate its tariffs on $200 billion worth of Chinese imports from 10 percent to 25 percent if a deal is not struck before then. /ee