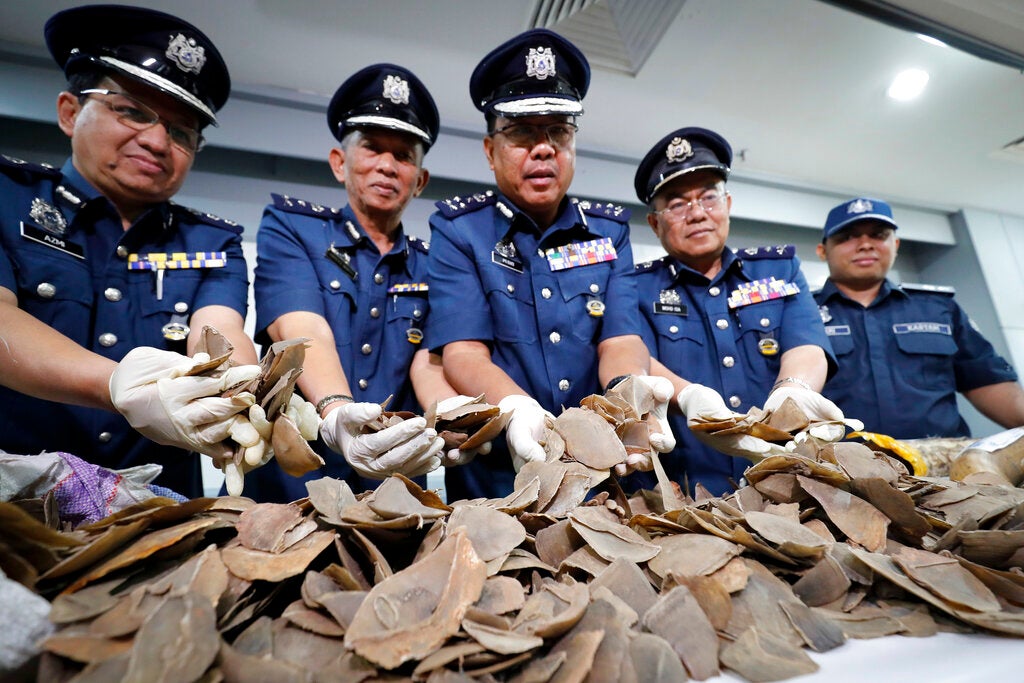 In this Aug. 2, 2017, file photo, seized pangolin scales are shown by a Malaysian Customs officials after a press conference at Customs office in Sepang, Malaysia. Malaysian authorities have seized a record 30 tons of pangolin and pangolin products in eastern Sabah state on Borneo, the biggest such bust in the country, a wildlife monitoring group said Tuesday. (AP Photo/Vincent Thian, File)

KUALA LUMPUR — Malaysian authorities have seized a record 30 tons of pangolin and pangolin products in eastern Sabah state on Borneo, the biggest such bust in the country, a wildlife monitoring group said Tuesday.

The monitoring network TRAFFIC said in a statement that Sabah police this month uncovered two major pangolin processing facilities, throwing a spotlight on Sabah’s role in the sourcing and trafficking of the endangered scaly mammal.

Sabah police said over the weekend they had seized three refrigerated containers containing 1,800 boxes filled with frozen pangolins, another 572 frozen pangolins in separate freezers, 61 live pangolins and 361 kilograms of pangolin scales. Two bear paws and carcasses of four flying fox were also recovered.  A 35-year-old Malaysian man, believed to be a factory manager, has been detained.

The pangolin is said to be the most widely trafficked mammal in the world, and its scales are in high demand in Asia for use in traditional Chinese medicine. The scales are made of keratin, the same material in human fingernails. Their meat is also considered a delicacy in China and other Asian countries.

Sabah police chief Omar Mammah said in the statement that initial investigations showed the facility has operated for seven years and that the suspect had bought the pangolins from local illegal hunters for distribution locally and to the neighboring state of Sarawak. He estimated the haul to be worth at least 8.4 million ringgit ($2 million).

Traffic said the whole pangolin bodies found frozen and boxed were likely to have been sold for meat consumption.

“Including this bust, Sabah has been implicated in over 40 tons of pangolin smuggling since August 2017, including 13 tons of African pangolin scales,” it said.

It said the seizures came a decade after Sabah authorities discovered logbooks in 2009 kept by another pangolin trafficking ring. It said the logbooks revealed that about 22,200 pangolins were killed and 834.4 kilograms of pangolin scales sourced throughout the state and supplied to the syndicate over 13 months.

There were occasional seizures of live and processed pangolins since then. But a massive seizure of African pangolin scale shipments in 2017 at a Sabah port and at the Kuala Lumpur International airport originating from Sabah has since highlighted Sabah’s emerging role as a transit point in the global trafficking of pangolin scales from Africa to Asia, TRAFFIC said.

The latest “seizure and the 2009 discovery confirm that Borneo is still an important source of pangolins for the illegal trade,” Traffic communications officer Elizabeth John told the Associated Press. /kga