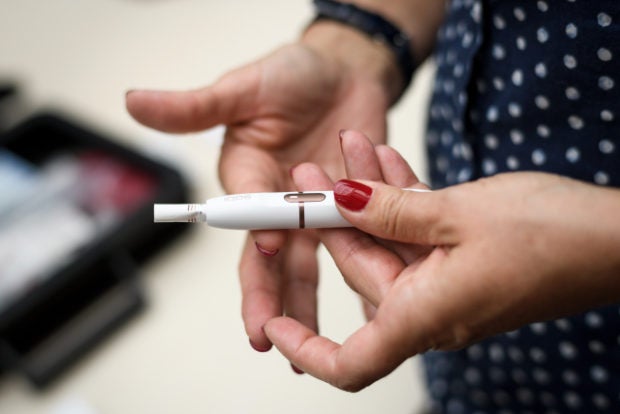 An iQOS electronic cigarette, which heats tobacco sticks but does not burn them, is shown at Philip Morris International’s research and development campus in Neuchatel, Switzerland on August 21, 2018. Image: AFP/Fabrice Coffrini

Gadgets that monitor health, from wearable step-counters to apps tracking sleep and diet, have exploded in popularity in recent years, and now even the tobacco industry is trying to jump into the fray.

While health promotion and Big Tobacco appears incongruous, Philip Morris International (PMI) says the technology in its new “vaping” products could be used to offer users activity-tracking services and even life insurance rebates.

“We have electronics in the new product, so we have an ability to connect with consumers that carry these products 16-17 hours a day,” PMI chief Andre Calantzopoulos told AFP in a recent interview.

The world’s biggest cigarette vendor is trying to promote its new “smoke-free” products, like electronic cigarettes and heated tobacco devices, as far less harmful alternatives to the deadly habit it has long been peddling.

The maker of Marlboro says its science shows that the new products release far fewer dangerous toxins than conventional cigarettes.

But without conclusive independent research, the international health is community is not convinced by its “harm-reduction” claims.

The World Health Organization and others remain wary of engaging on the issue with an industry that has lied about the safety of its products in the past.

While PMI says it wants a WHO stamp of approval it is also seeking other avenues to persuade smokers they would be better off switching to its smoke-free line.

The company is planning to partner with life insurance companies to provide reduced-rates to users of their most popular heated tobacco product, IQOS, Calantzopoulos said.

Unlike e-cigarettes, which contain nicotine liquid but not tobacco, IQOS and similar devices heat — but do not burn — small tobacco sticks, releasing tobacco vapour.

Calantzopoulos says users of “smoke-free” products should pay less for life insurance than regular smokers — who are often charged double the amount for non-smokers.

A number of insurers offer customers discounts if they allow their exercise habits to be monitored with wearable fitness trackers, and can prove they have an active and healthy lifestyle.

While this practice — known as incentive-based health tracking — has raised concerns about privacy, it is also seen as a lucrative business opportunity.

‘Wearables the way to go’

PMI says insurers have voiced interest in offering a similar service to customers who through electronic monitoring can show they have switched to smokeless products.

Derek Yach, the founder and president of the PMI-backed Foundation for a Smoke-Free World, supports this practice to help people move off cigarettes.

“I believe that wearables are the way you want to go,” he told AFP.

Wearable devices are already pushing people to get more exercise, sleep and to eat better, he said. “The thing that is missing is helping people stop smoking.”

Connected bracelets could detect the different hand movements used when smoking cigarettes or using electronic devices, allowing insurance companies to monitor whether a customer has truly switched, he said.

Today, there are some one billion smokers worldwide, and more than seven million deaths annually linked to tobacco use, according to the WHO.

PMI says its new products are key to bringing down those numbers.

And they dismiss the life insurance plan as disingenuous.

“This is yet another ploy by Philip Morris to peddle… and healthwash its addictive and potentially dangerous products,” Taylor Billings of advocacy group Corporate Accountability told AFP in an email.

The industry could profit if it manages to persuade the global health community of the “harm-reduction” claims.

It is seeking an exemption for the new products from the heavy taxes and stringent advertising bans widely slapped on cigarettes.

But in October, members of WHO’s Framework Convention on Tobacco Control (FCTC) decided the new products should face the same restrictions as cigarettes.

“Tobacco use should not be renormalized,” she said.

Anti-tobacco activists also highlight the appeal the new sleek devices have with young people, warning they could hook a whole new generation on tobacco and nicotine.

Calantzopoulos said he understood the “deficit of trust.” But he urged the health community to at least consider the possibility the new products could help cut the number of people smoking conventional cigarettes.

Yach, himself a former high-level WHO official who was instrumental in developing the FCTC more than a decade ago, said the history of the tobacco industry left him feeling “revulsion.”

But he said he believed the industry’s hunger for profit had finally motivated it to develop less harmful products, which he argued could serve as tools towards eliminating cigarettes.

Yach, who insists his foundation is fully independent from PMI, urged his former colleagues to review the industry’s science and conduct their own research to check the claims.

But he added: “That doesn’t mean that you should stop monitoring them.” CC

Youth smoking decline stalls, and vaping may be to blame

Ellen DeGeneres, too, is baffled by viral Filipino soda ad

Why Kris Aquino sleeps with her pearls