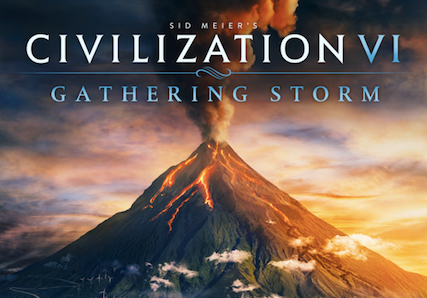 What will climate change look like, if allowed to continue, and how can we deal with it?

With talk of a Green New Deal in the United States, warnings that insect populations may die out with catastrophic effects for humankind, and school students striking in a call for large-scale government action in the United Kingdom, grand strategy game “Civilization VI” provides one way to answer those questions through a February 2019 add-on called Gathering Storm.

Following its first weekend of availability, Gathering Storm is currently the number one seller on the Steam and Humble download stores while, along with “Civilization VI”, it occupies three spots on the Fanatical chart.

Players can choose paths forward for their civilizations by leveraging real and conceptual technologies, negotiating with a World Congress on critical issues, and observing the impact of their decisions on the world ecosystem, developer Firaxis Games explains.

The simulation game churns out volcanoes, floods, and droughts, and storms that carry payloads of rain, sand, snow, and powerful winds.

A virtual thermometer also keeps tabs on global temperatures, modeling the effects of melting polar ice caps and rising sea levels should players not manage to rein in or offset their fossil fuel dependence in time.

GOG’s current bestseller, “Frostpunk”, also examines extreme weather, though with humanity’s remnant trying to survive a new ice age, while popular Itch.io download “How to Be a Tree” takes a more comical approach to strengthening bonds with the natural world.

TOPICS: Civilization VI: Gathering Storm, Frostpunk, Gaming, Steam, weekly PC download charts
Read Next
‘Invasion’ of polar bears in Russian Arctic over
EDITORS' PICK
LIST: What to expect in areas under GCQ, MGCQ
PNP to maintain checkpoints during GCQ to ensure compliance to health protocols
Notice of 2020 regular meeting of stockholders June 18, 2020
DOTr bares 2 phases of public transport revival in GCQ areas
SM prepares for ‘safe malling’
Leveling up your ‘lutong bahay’ with the kitchen companion you never knew you needed
MOST READ
LIST: What to expect in areas under GCQ, MGCQ
DOH explains: Only 109 of record-high 539 COVID-19 patients were ‘fresh cases’
Duterte approves Metro Manila’s shift to GCQ starting June 1
300 buses to resume operations in NCR by June 1 — Año
Don't miss out on the latest news and information.