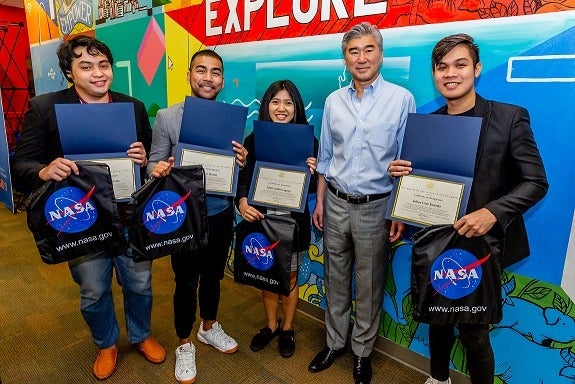 MANILA, Philippines — United States Ambassador to the Philippines Sung Kim congratulated the Philippine team for winning the 2018 NASA Space Apps Challenge and creating an app that sends real-time information on weather and sea conditions using NASA GLOBE (Global Learning and Observations to Benefit the Environment) observer data direct to their analog mobile phones without having to use the internet.

Team iNON of the Philippines bested 1,395 other teams around the world in the Best Galactic Impact category with ISDApp.

“I am deeply impressed by team iNON’s fantastic achievement in defeating teams from around the world to win first place in the Galactic Impact category of the NASA (National Aeronautics and Space Administration) Space Apps Challenge,” Kim said in a statement.

“They can inspire other Filipino youth to develop innovative solutions to problems in their own communities,” he added.

Kim awarded the team members their certificates of recognition at the U.S. Embassy in Manila.

The app’s name ISDApp was coined by the team from the Filipino word “isda” or fish. It was Team iNON’s entry to the U.S. Embassy-sponsored NASA Space Apps Challenge in October 2018.

“ISDapp is a simple solution with an important purpose, which we believe helped it swim to success.  This is proof that even technology needs a heart,” said Legaspi.

“We saw the problem, and figured we could do something to help the lives of coastal communities around the world,” Martin, another team member added.

Deputy Chief of Mission John Law, who was one of the judges in the competition, said ISDApp could be a vital communication tool to immediately send information to fisherfolk and to members of coastal communities who do not have access to the internet.

“Team iNON’s approach to getting important information out to members of coastal communities without internet connectivity struck me as clever and compassionate, and I’m pleased they received global recognition,” he said.  /muf