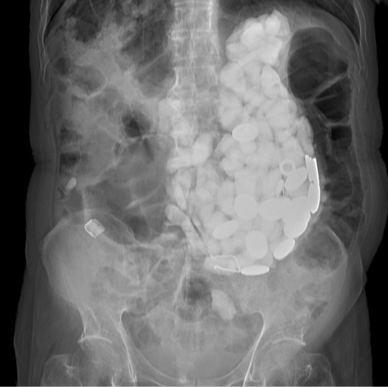 This X-ray shows a case study of a 54-year-old patient eating stones, bottle caps and coins, which he said was a way to relieve him of his anxiety.  Image: American Journal of Medical Case Reports

In a rare case, doctors removed numerous pebbles, bottle caps and coins from a patient who ate them to “relieve his anxiety.”

The patient, who was not identified and  only described as a 54-year-old man, was first admitted to a hospital’s emergency department of epigastric pain. This was shared by Dr.Pyong Wha Choi of Inje University College of Medicine’s Ilsan Paik Hospital in Goyang, South Korea, and published in the American Journal of Medical Case Reports.

Aside from his age, the patient was found born with mental retardation and had a 10-year-history of anxiety disorder.

During the time of his admission, doctors said that “something resembling small stones” were found in his stomach, and an X-ray showed many foreign bodies inside his body.

The patient admitted that in the past, he had a habit of eating pebbles and coins whenever he felt anxious, despite taking anti-anxiety medication. 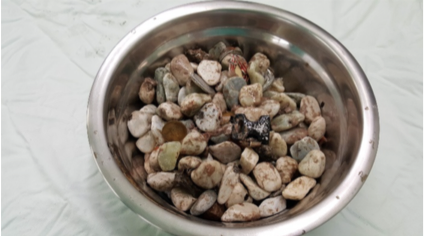 To remove the objects, doctors first attempted gastroscopy, which involved a thin tube being inserted to the stomach via the mouth. Because of the amount of the objects, they then resorted to surgery to remove what they found were pebbles, coins and bottle caps, which all weighed around two kilograms.

Choi noted that while mentally retarded patients swallow objects accidentally, some, with psychiatric disorders, may swallow them on purpose.

“Cases with a large number of gastric foreign bodies are extremely rare in humans,” the study said. “However, such foreign body ingestion may occur in patients with psychiatric disorders for secondary gain or other purposes.”  /ra