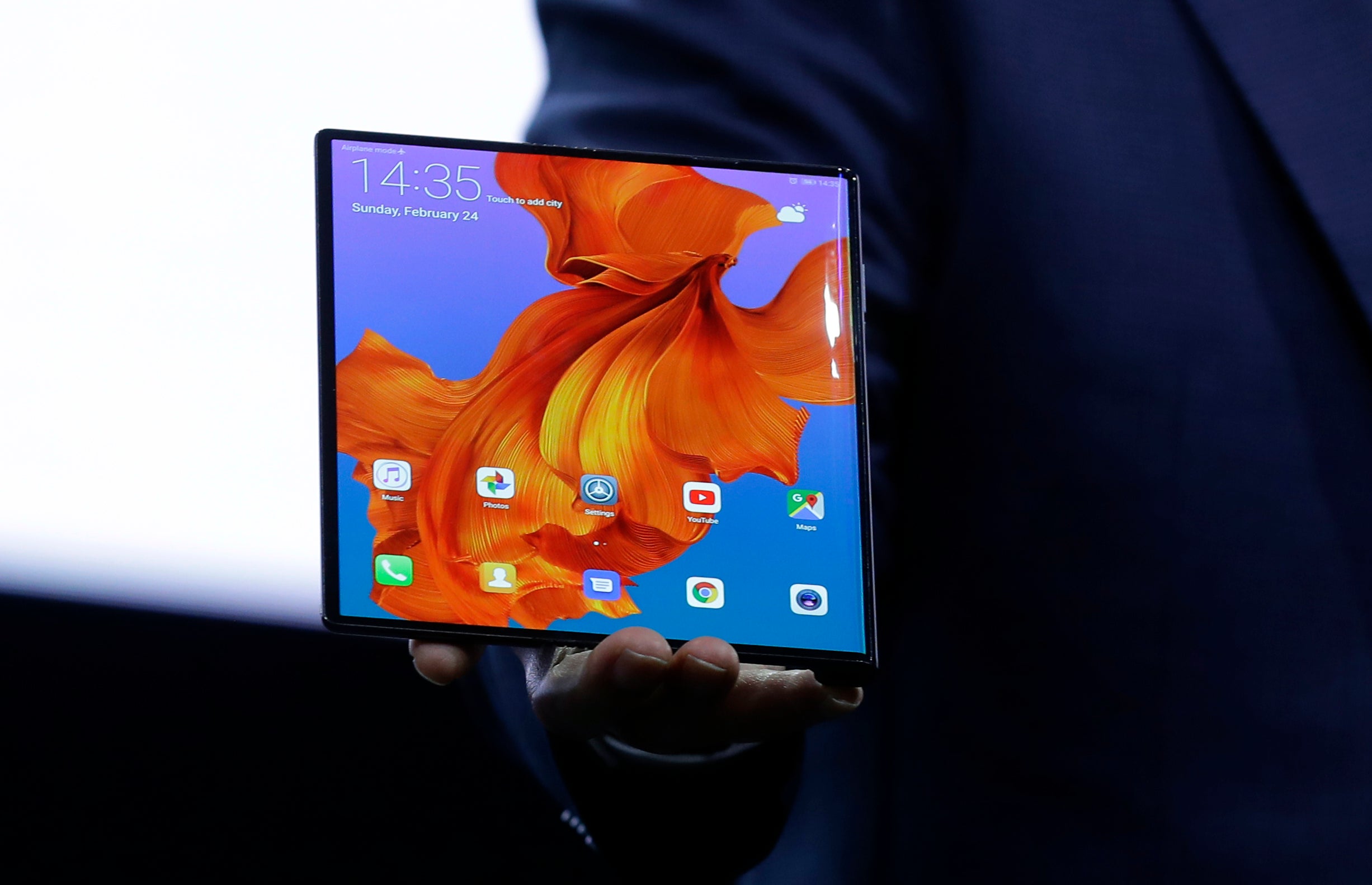 Huawei revealed its Mate X phone on the eve of MWC Barcelona, a four-day showcase of mobile devices, as the company battles U.S. allegations it is a cybersecurity risk.

The device can be used on superfast next-generation mobile networks that are due to come online in the coming years.

Device makers are looking to folding screens as the industry’s next big thing to help them break out of an innovation malaise, although most analysts think the market is limited, at least in the early days.

The Mate X is the answer to a question Huawei faced as it sought to satisfy smartphone users’ demands for bigger screens and longer battery life, said Richard Yu, CEO of its consumer business group.

“How can we bring the more big innovation to this smartphone industry?” Yu said at a glitzy media launch.

The Mate X’s screen wraps around the outside so users can still view it when it’s closed, unlike the Galaxy Fold, which has a screen that folds shut. Unfolded, the Mate X’s screen is 8 inches diagonally, making it the size of a small tablet.

“No matter how innovative and technology-advanced the new device is, it will take a lot more time for a critical mass of consumers to experience the benefits of foldable phones and 5G technology,” Forrester analyst Thomas Husson said. Huawei still “has to find its own brand voice to differentiate from Samsung and Apple and stop acting as a technology challenger.”

Huawei Technologies is trying to raise its profile in the fiercely competitive smartphone market. Almost everyone with a smartphone has heard of Apple and Samsung, the top device makers, and Google, the power behind Android’s pervasive software.

Huawei, a Chinese company with a name many people in the West don’t know how to pronounce (it’s “HWA-way”), wants to join the market’s upper echelon.

It’s getting close. Samsung was the No. 1 smartphone seller for all of last year, followed by Apple, according to research firm International Data Corp. Huawei came third, though in some quarters it took second place, IDC data showed.

The company stealthily became an industry star by plowing into new markets, honing its technology, and developing a line-up of phones that offer affordable options for low-income households and luxury models that are siphoning upper-crust sales from Apple and Samsung in China and Europe.

But Huawei’s products are few and far between in the U.S. The scarcity stems from long-running security concerns that the company could facilitate digital espionage on behalf of China’s government. Washington has been lobbying European allies to keep its equipment out of new 5G networks.

The cloud over Huawei also includes U.S. criminal charges filed last month against the company and its chief financial officer, Meng Wanzhou, who U.S. prosecutors want to extradite from Canada. They accuse her of fraud and say the company stole trade secrets, including technology that mobile carrier T-Mobile used to test smartphones.

Huawei is making its push at a time that both Samsung and Apple are struggling with declining smartphone sales amid a lull in industry innovation that is causing more consumers to hold on to the devices until they wear out instead of upgrading to the latest model as quickly as they once did.

The company sells high-priced smartphones as well as an extensive range of cheaper models priced from $200 to $600 that offer a good camera and other features most consumers want, analysts said.

But Huawei wouldn’t be where it is today if it had been content focusing merely on China and other Asian markets.

The company took a huge step forward several years ago when it began pouring millions into promoting its brand and building partnerships in major European markets such as Germany, France, Britain, Spain and Italy. Research firm Gartner estimates it now sells about 13 percent of its phones in Europe.

As for the U.S., Huawei can only make so much headway as long as the government is casting the company as a cyber-villain, said Gartner analyst Tuong Nguyen.

“Brand building is a long-term exercise, but it’s going to be especially difficult in the U.S. because of the way they have branded all of China,” he said. “The barriers in the U.S. are just getting more difficult.” /kga