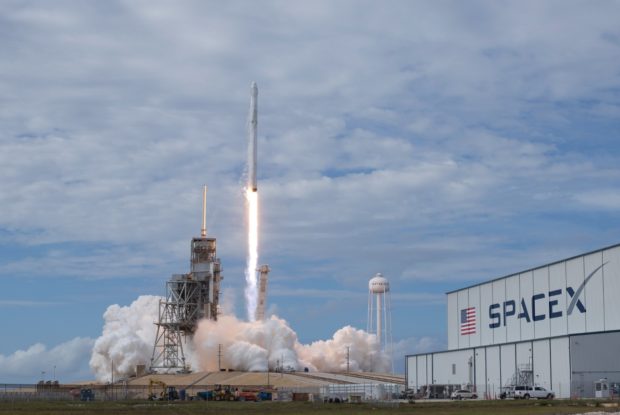 This image provided by NASA shows the SpaceX Falcon 9 rocket, with the Dragon spacecraft onboard, launching from pad 39A at NASA’s Kennedy Space Center in Cape Canaveral, Florida, Saturday, June 3, 2017. This will be the 100th launch, and sixth SpaceX launch, from pad 39A. Previous launches include 11 Apollo flights, the launch of the unmanned Skylab in 1973, 82 shuttle flights and five SpaceX launches. NASA / AFP /Bill Ingalls via The Jakarta Post/Asia News Network

JAKARTA — Over 300 people crowded the lobby of telecommunications company Pasifik Satelit Nusantara (PSN) in South Jakarta at 8:30 a.m. on Friday.

They stared intently at a giant LED screen showing a live broadcast of a SpaceX Falcon 9 space rocket located over 17,400 kilometers away at the Cape Canaveral in Florida, the United States.

This was a make-or-break moment for the PSN as the rocket was carrying its sixth and the country’s highest capacity satellite to date – the Nusantara Satu satellite – that promises to help bridge Indonesia’s digital gap and thus boost economic activity in the regions outside of Java.

PSN finance director Ravi Talwar was among the viewers in Jakarta.

“I was anxious. It had to work. We had hundreds of people working on this for four years,” he said.

His anxiety was justified as the Nusantara Satu project cost US$230 million, financed by the PSN’s internal funds at 30 percent and state-owned export credit agency Export Development Canada at 70 percent.

His hopes were not in vain. Elon Musk’s SpaceX launched the rocket, which also carried two other payloads: a US Air Force experimental spacecraft and an Israeli moon lander that, if it successfully lands in eight weeks, will become the world’s first privately funded moon landing.

This form of “ride-sharing” halved the cost of launching the Nusantara Satu, which used four tons out of the Falcon 9’s maximum seven-ton capacity.

Once reaching its geostationary orbit above Papua within two weeks, the Nusantara Satu, which has a capacity of 15,000 megabits per second (Mbps), is expected to provide internet connectivity of up to 3Mbps for 10,000 Indonesian villages this year.

PSN president director Adi Rahman Adiwoso told reporters during a press conference that his company was very optimistic on growth because poor telecommunications infrastructure outside of Java meant that many people had to rely on the satellite-facilitated internet.

“We cannot enter Java because it has enough internet connectivity, either through 4G or fiber optic. So our service, which is more expensive, cannot compete there,” he said.

Furthermore, PSN’s promised 3 Mbps internet speed is slower than the last recorded average speed of 7.2 Mbps in Indonesia, according to Akamai Technologies.

Nevertheless, PSN calculated that there were at least 25 million Indonesians, mostly in eastern Indonesia, who could not access conventional internet facilities and thus would have to buy satellite internet.

Talwar said his company expected to record $55 million in revenue each year from Nusantara Satu’s operations.

The company is so optimistic over its market potential that it has already begun working on two more satellites named the Nusantara Dua and Nusantara Tiga, which are slated for launch in 2020 and 2022 respectively.

Indonesian Telecommunication Society chairman Kristiono, for his part, supports private sector companies such as PSN that can overcome infrastructure barriers and improve internet penetration in the country.

“It all depends on the private sector because infrastructure problems are a neverending story,” he said.

Communications and Information Minister Rudiantara also expressed support for PSN’s satellite when he attended the announcement of the official launch in December last year.

“We appreciate the private sector’s support for the government’s plan to connect Indonesia and improve economic efficiency,” he said.

The ministry is also working on its own Satria 1 satellite, slated for launch in 2022. The satellite will have a larger capacity of 150 gigabits per second than the Nusantara Satu, but its connectivity will be focused on public facilities, such as schools, clinics and regional administrative offices.