Robinson Crusoe island sets example for the world in conservation

For almost a century, the inhabitants of Robinson Crusoe — named for literature’s most famous castaway — have known that their island’s fragile ecosystem depends on them conserving its unique wildlife. 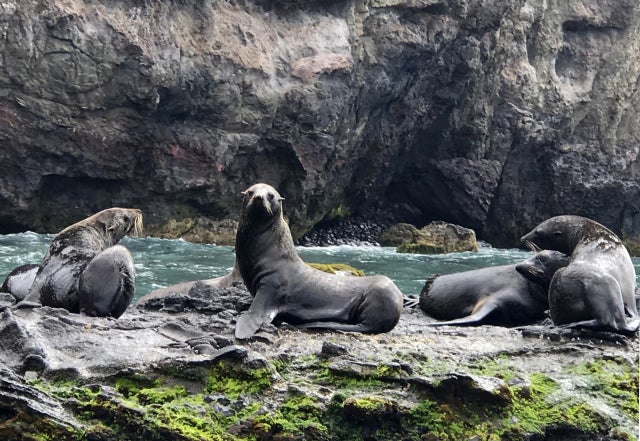 Sea lions bask on rocks on Robinson Crusoe Island, in the Pacific Juan Fernandez Islands, off the coast of Chile, on January 30, 2019. This divers’ paradise, some 700 km west of the Chilean coast and with a population of about a thousand inhabitants, has just taken a fundamental step in its conservation — by 2020 it aspires to become free of single-use plastics. Image: Ana FERNANDEZ / AFP

One of three islands in the Juan Fernandez archipelago, 700 kilometers (430 miles) off the Pacific coast of Chile, it was discovered in the sixteenth century.

The island chain secured its place in history as the home of Alexander Selkirk, the Scottish sailor marooned there for four years and four months, a tale he later related to Daniel Defoe, who penned his adventure book based on his story.

One of the other islands in the chain is called Alexander Selkirk, the third is Santa Clara.

In 1977, the archipelago was named a biosphere reserve and almost a year ago, Chile announced the creation of the enormous Juan Fernandez Marine Park. Covering an area of 262,000 square kilometers (101,000 square miles) of ocean, it is one of the largest protected zones in the Pacific.

It also connects to a network of marine reserves in Chile totaling some 1.3 million square kilometers, meaning that about 44 percent of the nation’s waters have some level of protection against mining and industrial fishing.

“Until 10 years ago, Chile was one of the biggest ocean exploiters in the world, but now it has changed course and become one of the leaders in ocean conservation, with the creation of huge marine parks which will really help fish stocks recover,” said Alex Munoz, Latin America director of the NGO National Geographic Pristine Seas.

“But we are still a sick patient in need of recuperation,” he said.

The wildlife of these remote islands faces various threats, including ocean trash — in particular plastic — and invasive species that have been introduced to the fragile ecosystem of Juan Fernandez, home to around 1,000 people.

Cats, rats and coatis (a type of South American raccoon) are the main hazard for the Juan Fernandez firecrown, a type of hummingbird found only in the islands, and whose eggs and chicks are easy prey.

They are also a threat to the pink-footed shearwater, a migratory seabird which only nests in the archipelago, where there are 35,000 pairs, and on Mocha Island, close to the mainland, where there are 60,000 breeding pairs.

The environment ministry has just launched a recovery plan to protect the underground nests of the shearwaters, which fly in to mate every year from the United States and Canada.

“People are taking this seriously,” said Pablo Manriquez, coordinator for the NGO Oikonos, noting that residents have changed their street and house lights from white to red or green to help the shearwaters avoid crashing into buildings and trees in foggy weather when the bright lights appear to disorient them. Downed birds are vulnerable to predators.

Work has also been started to preserve the luma trees where hummingbirds nest, eradicating non-native blackberry bushes that strangle the trees.

Sustainable fishing is the archipelago’s main goal. As far back as 1935, fishermen started introducing measures to preserve the islands’ principal source of income, the lobster, which is mainly sold to China where a live crustacean can bring in $200.

“They brought down the catch by 75 percent!” said fisherman Wilson Gonzalez, whose family has been fishing here for generations.

The result was the first sustainable fishery in South America, said Daniel Gonzalez, head of the islands’ fishing union.

Fishing is only permitted from October 1 until May 15 and only then using wooden lobster pots. There are also limits on the size of lobsters that can be taken, and females with eggs are returned to the sea.

There are other notable success stories: the South American fur seal, a species that was almost extinct 40 years ago, now has a population of 30,000 on the islands.

“The great asset of Juan Fernandez is that the local population takes part in conserving species, together with the NGOs,” said Environment Minister Carolina Schmidt on a recent visit.

A paradise for divers and hikers, the islands are opening up to tourism, though getting here is tricky — the small planes that fly in carry a maximum of eight passengers because they have to carry enough fuel for the return trip, which means tickets are expensive at $800 a head.

Plastic that arrives on supply ships from the mainland every two weeks, or is washed up on ocean currents, is one of the islands’ main challenges.

Unlike Easter Island, another far-flung Chilean outpost in the Pacific which ships some of its plastic back to the mainland for recycling, the archipelago burns all its waste, some 315 tons of it.

Munoz, together with local authorities and the environment ministry, has just signed an agreement that will see the islands eradicate plastic by 2020.

“If we want a zero-waste world, we need to start with a world without plastic,” said Schmidt. NVG