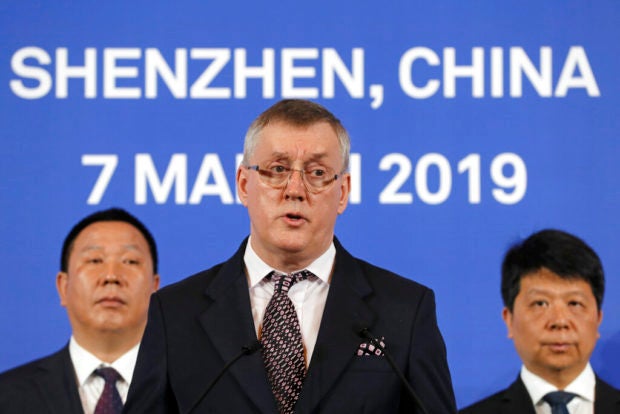 SHENZHEN, China — Chinese tech giant Huawei is challenging a US law that labels the company a security risk and would limit its access to the American market for telecom equipment.

Huawei Technologies Ltd.’s lawsuit, announced Thursday, asks a federal court to throw out a portion of this year’s US military appropriations act that bars the government and its contractors from using Huawei equipment on the grounds it is unconstitutional.

It comes as the biggest global maker of network equipment for phone and internet companies fights US efforts to persuade allies to exclude the company from next-generation telecom systems.

The complaint, filed in Plano, Texas, the headquarters of Huawei’s US operations, cites the framers of the US Constitution, including Alexander Hamilton and James Madison, in arguing that the law in question violates the constitutional separation of powers, denies due process and amounts to a “Bill of Attainder” that singles out a specific entity for adverse treatment.

It says the law causes the company “concrete and particularized injury, and imminent future injury” and subjects it to a “burden that is severe, permanent and inescapable” that amounts to the corporate “death penalty.”

Huawei, China’s first global tech brand, is at the center of US-Chinese tensions over technology competition and cyber-spying. The company has spent years trying to put to rest accusations it facilitates Chinese spying or is controlled by the ruling Communist Party.

Increasingly, both sides appear to be resorting to courts to try to press their cases.

“We are compelled to take this legal action as a proper and last resort,” the company’s rotating chairman, Guo Ping, said at a news conference. Guo said the ban would limit competition, slowing the rollout of fifth-generation communications and raising consumer prices.

Huawei has pleaded not guilty to US trade-theft charges after a federal court in Seattle unsealed a 10-count indictment in January against two of its units, Huawei Device Co. and Huawei Device USA. The charges include conspiracy to steal trade secrets, attempted theft of trade secrets, wire fraud and obstruction of justice.

The company’s chief financial officer, Meng Wanzhou, is fighting extradition to the US after she was arrested in Vancouver, Canada on Dec. 1. US prosecutors have filed charges accusing Meng, who is the daughter of Huawei’s founder, of lying to banks about dealings with Iran.

The company has about 40 percent of the global market for network gear but its US sales evaporated after a congressional panel in 2012 cited the company and a Chinese competitor, ZTE Corp., as security risks and told phone carriers to avoid dealing with them.

US authorities “have hacked our servers and stolen our emails” but have presented no evidence to support their security claims, Guo said. He complained Washington was “sparing no effort to smear” the company.

The US campaign to persuade allies to shun Huawei threatens to block access to major markets as phone carriers prepare to invest billions of dollars in 5G systems.

Huawei says the new law would shrink its potential US market further by prohibiting the government from buying the Chinese vendor’s technology and from buying goods or services from or giving grants or loans to companies or other third parties that do. The United States accounts for 20 to 25 percent of the global market for computer and telecom technology.

Huawei says the US law it is protesting improperly has Congress play the role of a court.

The ban is “based on numerous false, unproven and untested propositions,” said Song Liuping, the company’s chief legal officer, at the news conference. “Huawei has an excellent security record and program. No contrary evidence has been offered.”

Huawei, based in Shenzhen, near Hong Kong, is a leading developer of 5G along with rivals Nokia Corp. of Finland and Sweden’s LM Ericsson. Industry analysts say excluding the Chinese vendor from markets for 5G equipment would reduce competition and might lead to higher prices.

Founded in 1987 by a former military engineer, Huawei overtook Ericsson in 2017 as the biggest global supplier of network gear. It says it supplies 45 of the world’s top 50 phone companies and has contracts with 30 carriers to test 5G wireless technology.

European governments are balking at U.S. pressure to ban Huawei. The company has announced contracts with customers including the United Arab Emirates in the Middle East for network technology.

China’s government arrested two Canadians, a former diplomat and a businessman, on Dec. 10 in what was widely seen as an attempt to pressure Canada to release Meng, the company’s CFO.

On Monday, Beijing accused the two men of acting together to steal state secrets. That followed the Canadian government’s announcement Friday that the extradition proceeding for Meng would be allowed to continue.

Huawei executives say American security warnings have yet to affect sales outside the United States. The company’s 2018 revenue forecast is $100 billion and its founder, Ren Zhengfei, said last month this year’s target is $125 billion.

Some European officials and others cite a Chinese security law requiring companies to cooperate with intelligence agencies. They say Huawei and other tech companies might be required to install “backdoors” in equipment to allow eavesdropping.

Huawei denies altering its equipment to facilitate spying and has set up testing centers in Britain, Canada and continental Europe to allow governments to examine its technology.

“Huawei has not and will never implant ‘backdoors,'” said Guo, the chairman.

The company also has launched a public relations campaign abroad.

Its typically press-shy founder, Ren, gave a two-hour interview to foreign reporters in January in which he said Huawei would reject Chinese government demands to disclose confidential information about its customers. Since then, Ren also has talked at length with foreign TV broadcasters. /ee