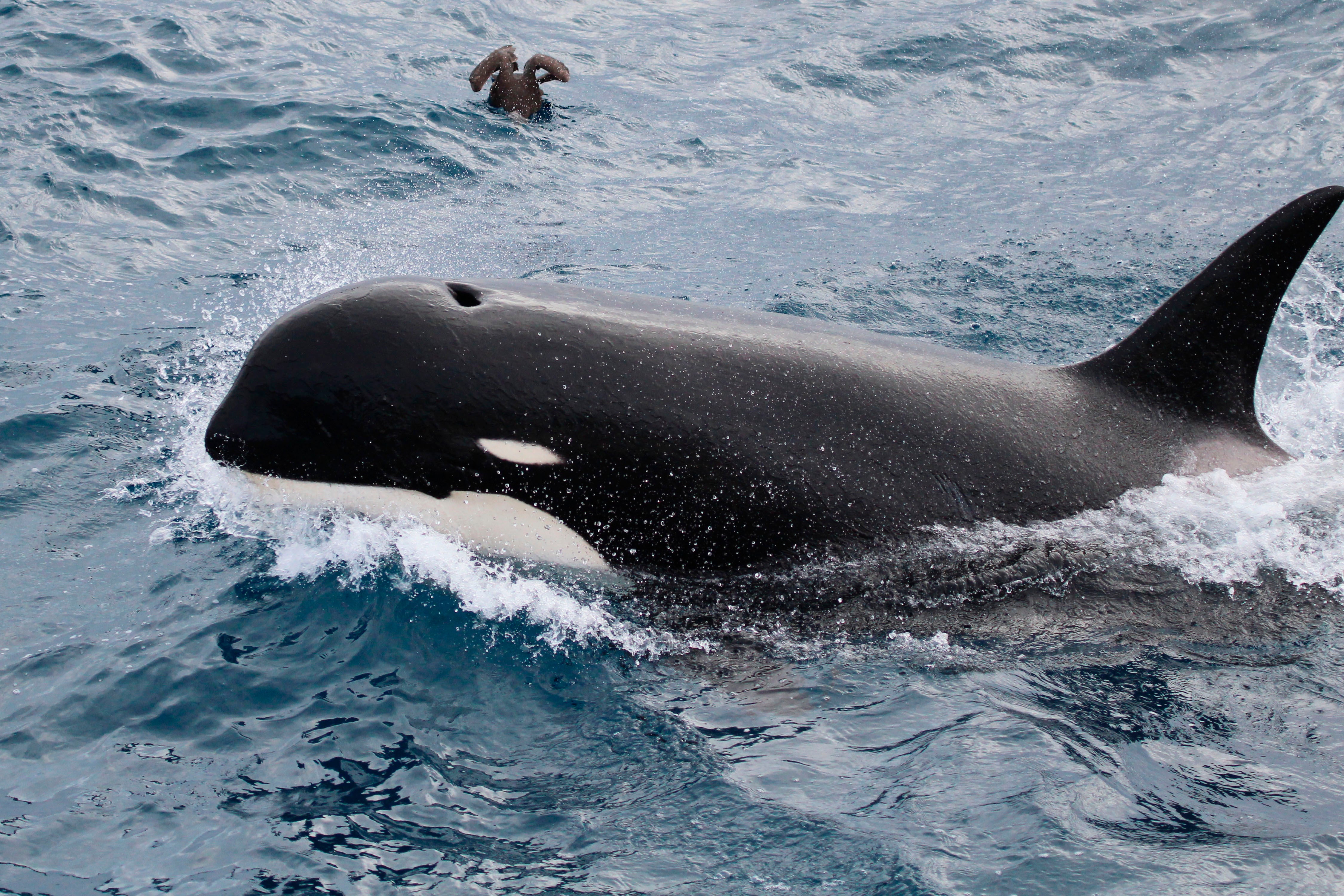 This undated photo provided by Paul Tixier in March 2019 shows a Type D killer whale. Scientists are waiting for test results from a tissue sample, which could give them the DNA evidence to prove the new type is a distinct species. (Paul Tixier/CEBC CNRS/MNHN Paris via AP)

WASHINGTON — For decades, there were tales from fishermen and tourists, even lots of photos, of a mysterious killer whale that just didn’t look like all the others, but scientists had never seen one.

An international team of researchers says they found a couple dozen of these distinctly different orcas roaming in the oceans off southern Chile in January. Scientists are waiting for DNA tests from a tissue sample but think it may be a distinct species.

The National Oceanic and Atmospheric Administration felt confident enough to trumpet the discovery of the long rumored killer whale on Thursday. Some outside experts were more cautious, acknowledging the whales are different, but saying they’d wait for the test results to answer the species question.

“This is the most different looking killer whale I’ve ever seen,” said Robert Pitman, a NOAA marine ecologist in San Diego. He was part of the team that spotted the orcas off Cape Horn at the tip of South America.

How different? The whale’s signature large white eye patch is tiny on these new guys, barely noticeable. Their heads are a bit more rounded and less sleek than normal killer whales and their dorsal fins are narrower and pointed.

They likely mostly eat fish, not marine mammals like seals, as other killer whales do, Pitman said. Fishermen have complained about how good they are at poaching off fishing lines, snatching 200-pound fish away.

Pitman said they are so different they probably can’t breed with other killer whales and are likely a new species. At 20 to 25 feet long (6 to 7.5 meters), they are slightly smaller than most killer whales. In the Southern Hemisphere, killer whales are considered all one species, classified in types A through C. This one is called type D or subantarctic killer whales.

Michael McGowen, marine mammal curator at the Smithsonian, said calling it a new species without genetic data may be premature. Still, he said, “I think it’s pretty remarkable that there are still many things out there in the ocean like a huge killer whale that we don’t know about.”

Scientists have heard about these distinctive whales ever since a mass stranding in New Zealand in 1955. Scientists initially thought it could be one family of killer whales that had a specific mutation, but the January discovery and all the photos in between point to a different type, Pitman said.

He said they are hard to find because they live far south and away from shore, unlike most killer whales.

“The type D killer whale lives in the most inhospitable waters on the planet. It’s a good place to hide.”

Pitman got interested in this mysterious killer whale when he was shown a photograph in 2005. When he and others decided to go find them, they followed the advice and directions of South American fishermen, who had seen the whales poaching their fish.

After weeks of waiting, about 25 of the whales came up to the scientist’s boat, looking like they expected to be fed. Equipment problems prevented the scientists from recording enough of the whale songs, but they used a crossbow to get a tissue sample. Pitman said the whales are so big and their skin so tough that it didn’t hurt them, saying the arrow “is like a soda straw bouncing off a truck tire.”

Pitman said he’ll never forget Jan. 21 when he finally saw his first and then a bunch of the type D orcas.

“For 14 years I was looking for these guys. I finally got to see them,” Pitman said.

He acknowledged that he did sound like the revenge-seeking captain in the classic novel “Moby-Dick.”

“I guess I know how Ahab felt, but for a good reason,” Pitman said.  /muf