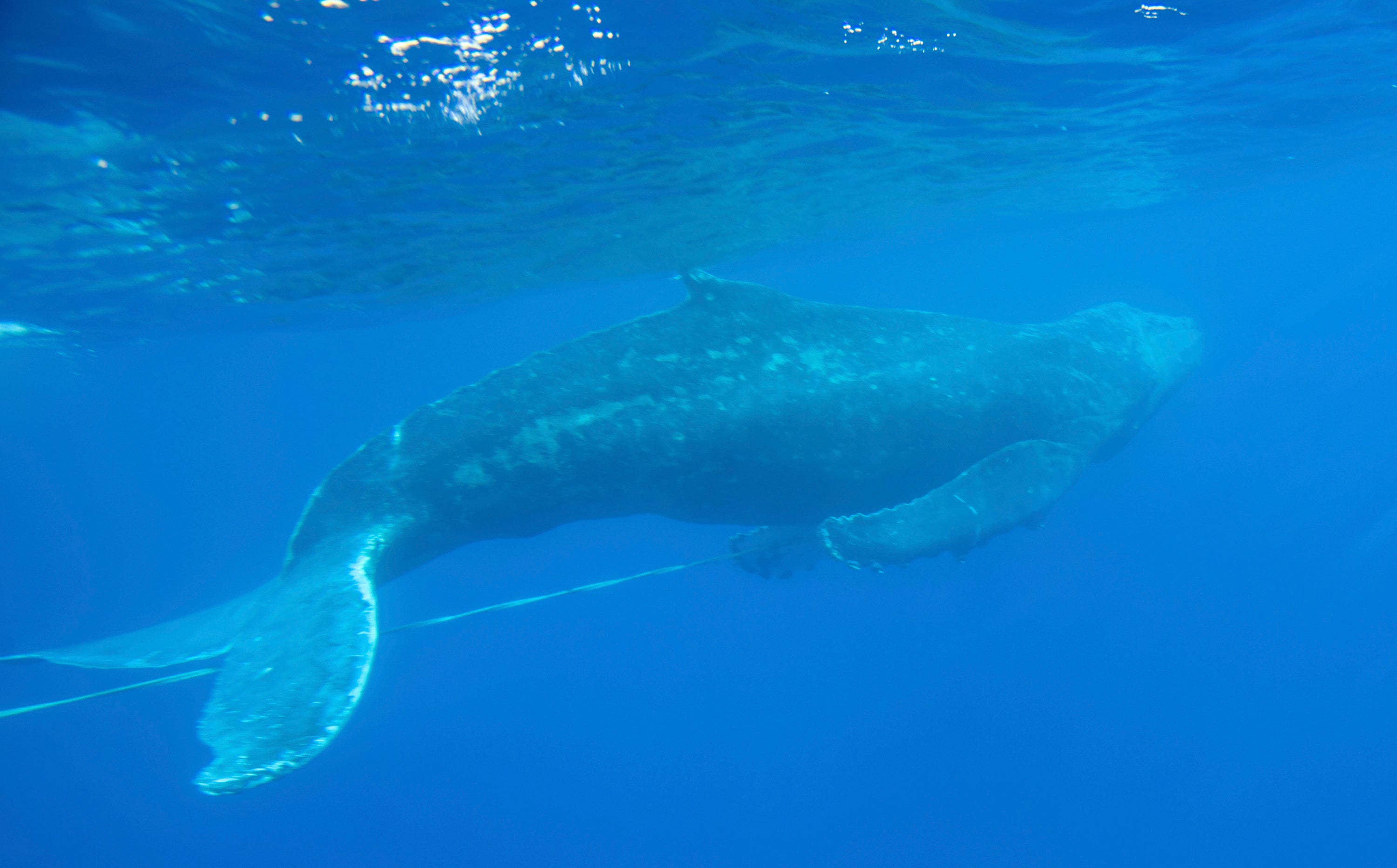 In this Wednesday, March 6, 2019 photo, provided by the NOAA Hawaiian Islands Humpback Whale National Marine Sanctuary, is an entangled subadult humpback whale that was freed of gear by a team of trained responders off Makena Beach, Hawaii. Officials say a number of private boats helped a team of federal responders free a young humpback whale from heavy gauge fishing gear off Hawaii. The National Oceanic and Atmospheric Administration said in a joint statement Thursday that the “subadult” humpback was first spotted Wednesday morning by a dive boat off Maui. (Ed Lyman/NOAA Hawaiian Islands Humpback Whale National Marine Sanctuary via AP)

The National Oceanic and Atmospheric Administration (NOAA) said in a joint statement that the “subadult” humpback was first spotted Wednesday morning by a dive boat off Maui.

The dive boat alerted officials that the whale was struggling, and NOAA’s Hawaiian Islands Humpback Whale National Marine Sanctuary coordinated a rescue effort with the U.S. Coast Guard and others. Several private boats, including a commercial fishing vessel, tracked the whale while waiting for officials to arrive.

The U.S. Coast Guard arrived and attached a tracking beacon to the whale in case they were not able to immediately remove the debris.

NOAA’s Ed Lyman, the sanctuary’s whale entanglement coordinator, was part of the team that cut the gear away from the whale. The whale was dragging about 500 feet (152 meters) of gear and the thick line was “deeply embedded” in the whale’s mouth, he said.

Lyman said when this happens officials will leave a portion of the line where it is to prevent further injury. The line usually falls out on its own once the weight of the entangled debris is removed, he said.

The team was able to cut the line from the whale ahead of its tail, which reduces the risk of it getting further entangled.

The whale was “moderately emaciated” and had light skin and carpets of whale lice on it, Lyman said.

“Those are all indicators that it had been carrying this gear for some time, likely months,” he added.

It is possible the whale migrated from Alaska or another northern feeding ground with the gear already attached. The trap line that was found in the whale is typically used to catch crabs and other bottom fish in the north Pacific.

“This would not be the first time a whale has dragged gear 2,500 nautical miles,” Lyman said. “This looks like it had been active gear, and it probably was up there and yes the whale probably dragged it, and there were impacts shown on the animal.”

Lyman said this young humpback has an “excellent chance of surviving” now that most of the line has been cut off.

Hawaiian humpbacks feed in the cool waters around Alaska in the summer and then come to the warmer waters around Hawaii to mate and raise their young in the winter months.

There are usually about 10 whale entanglement responses each year in Hawaii, Lyman said. There have been nine confirmed entanglements so far this season and 14 last year.

In November, a team of U.S. and international researchers, wildlife managers and federal officials met in Honolulu to discuss a decline in sightings of humpback whales in Hawaii.