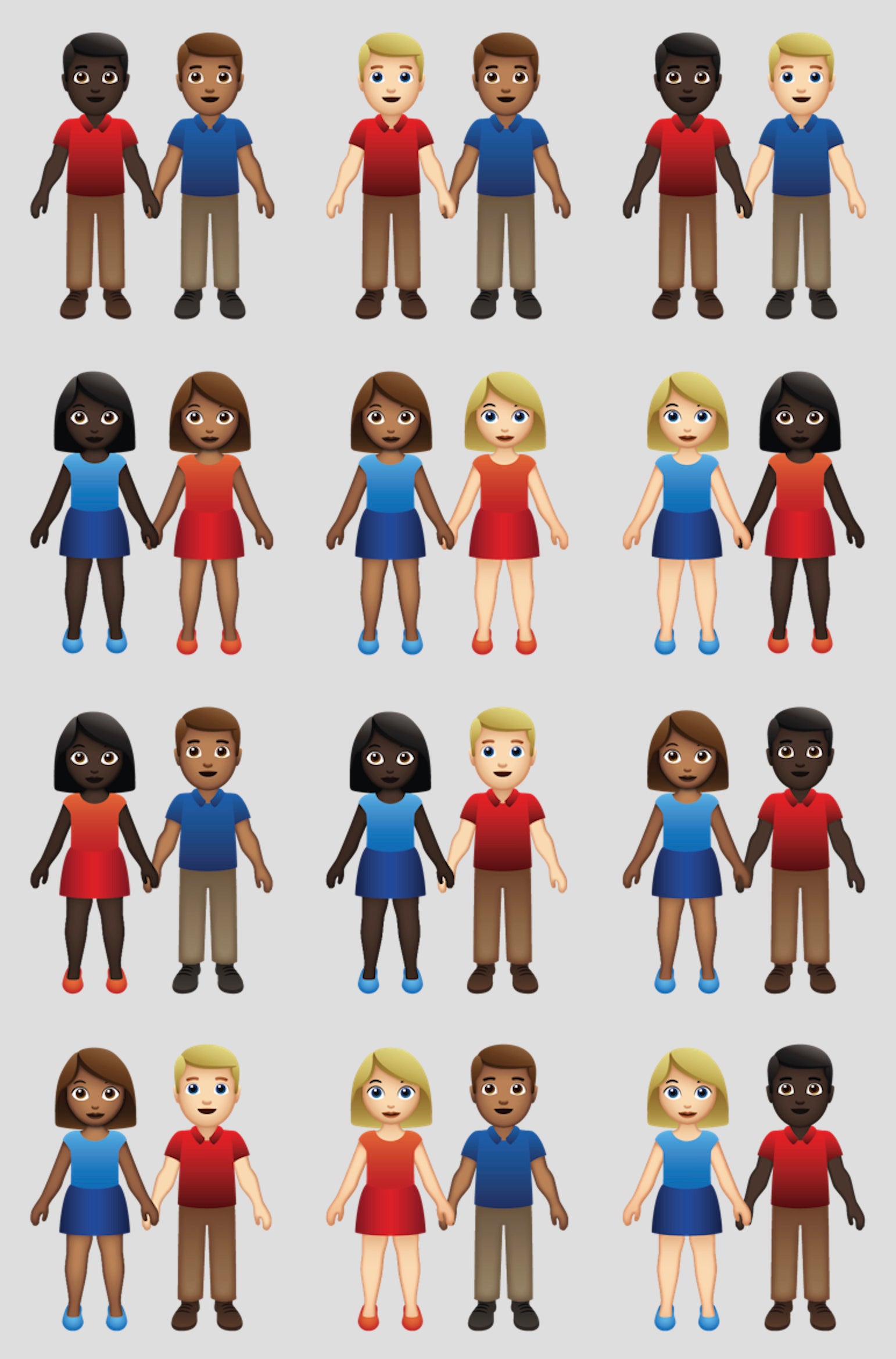 This undated illustration provided by Tinder/Emojination shows new variations of interracial emoji couples. In the world of emojis, interracial couples had virtually no options in terms of skin tone. But the emoji gods, otherwise known as the Unicode Consortium, recently rectified that, approving 71 new variations. Using six skin tones already available for one-person emojis, vendors such as Apple, Google and Microsoft will now be able to offer couples of color. Additions are expected later this year. (Tinder/Emojination via AP)

While such impediments to marriage were dismantled over time, there are still hurdles, however small, to overcome. Here, in 2019, interracial couples have a small victory to celebrate: The approval of 71 new variations of emoji for couples of color.

Capping a yearlong project by, of all people, the folks at the swipe-right dating app Tinder and tech activist group Emojination, the emoji gods (known as the Unicode Consortium) recently approved the additions in characters technically referred to as people “holding hands.” A new “gender-inclusive” couple emoji was also approved among 230 new characters.

Until now, emoji of two or more people on various platforms and devices have been available only in the default yellow.  While the Unicode Consortium, where Google, Microsoft and Apple have voting seats and Lee is vice-chair of the emoji subcommittee, signed off on the skin-tone additions, user companies will decide for themselves starting later this year whether to add them and how they will look.

Jenny Campbell, the chief marketing officer for Tinder, isn’t worried about distribution after the company mounted a campaign and petition drive in support of the technical proposal it submitted to Unicode.

“Ultimately, we wanted to get the interracial emoji couple on people’s keyboards not only for equality, but also to spread acceptance for all couples no matter what their race,” she told The Associated Press on Thursday. “Our users are craving a way to express themselves visually and see themselves reflected in our everyday tech language.”

So are lots of other emoji enthusiasts of color left in the wings for years.  More than 50,000 people signed Tinder’s online petition at Change.org.

“Unicode is taking user demand for more skin tones across emoji very seriously,” said Lee, the co-founder of the grassroots Emojination. “The additional of skin tones, gender variations, hijab and hair styles are part of users around the world demanding to see themselves represented on the emoji keyboard. Diverse couples and families are part of that.”

While facial features and hair textures are yet to be determined by some vendors, Tinder said the use of six existing skin tones already available for one-person emoji and various others is a step in the right direction at a time when the text- and chat-friendly characters remain a readily accessible way for the world to express itself. The lack of color options in couples, the company said, felt like a slight.

“Even as our social behaviors have evolved and interracial dating and marriage has become more prevalent, visual representation of these relationships in technology has lagged far behind,” Campbell said.

Emoji of single people of color and same-sex couples were added in the last several years, but not in mixed-tone combinations. In real life, the rate of interracial marriage has increased over the years, especially since the 1967 U.S. Supreme Court decision Loving v. Virginia that struck down all anti-miscegenation laws remaining in 16 states. But such marriages remain a small portion of marriages overall.

Tinder is taking credit for its industry in pushing interracial dating along, citing data that indicates couples who meet online are more likely to be interracial than those who don’t.

“We know that equal forms of representation are important to our users,” Campbell said, “and important to us.”

Skin tones for limited use were added to the Unicode Standard for emoji in 2015. More representation of women in 2016, some “gender-inclusive” people in 2017 and hair color options last year.

Also approved this year: A waffle, a much-requested white heart, a guide dog and people in wheelchairs. Oh, and a sloth.   /muf