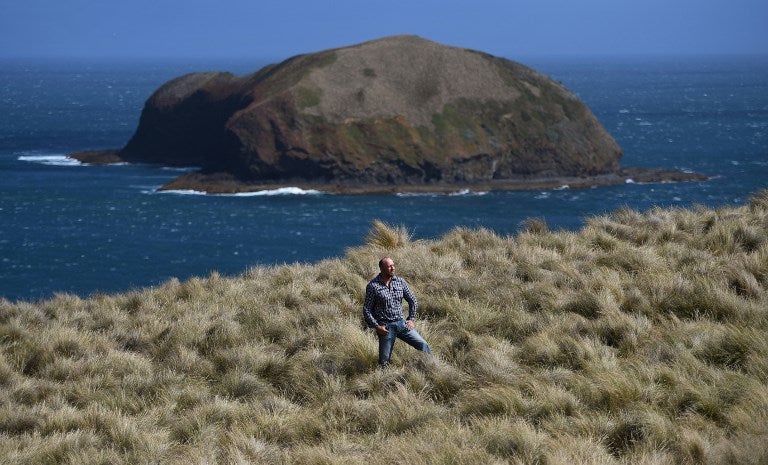 This photo taken on February 24, 2019 shows Mike Buckby from the Cape Grim Water Company posing in Cape Grim, Tasmania. – While the world’s most polluted cities struggle to attract talent or manage chronic illnesses, residents around Cape Grim in Tasmania have made a virtue of their relatively pristine environment. Mike Buckby, a “rain farmer” from the Cape Grim Water Company, has taken things to another level, harvesting water falling “from Earth’s purest skies.” (Photo by William WEST / AFP) / TO GO WITH Asia-environment-pollution-Australia, FEATURE by Andrew BEATTY

Cape Grim, Australia – As much of Asia wheezes, coughs, and sniffles its way through another smog season, one isolated and windswept corner of Australia is serving as the global standard for clean air.

With panoramic views of swaying tussock grass and the vast crystalline expanse of the Southern Ocean, Tasmania’s beautiful Cape Grim peninsula is an unlikely reference point for the scientific world.

But since 1976, this wild and blustery spot has been home to the Cape Grim Baseline Air Pollution Station – a small Australian government facility with the seemingly eccentric task of bottling air.

“Our job is essentially to find air as clean as you’re likely to find anywhere in the world and measure just how polluted it is,” Sam Cleland, the officer in charge of the station, told AFP.

Looking out from his office atop the high sea cliffs, the nearest landmass to the west is Argentina, and there is nothing to the south except Antarctica.

The facility’s isolated location makes it perfect for collecting what many have dubbed the cleanest air in the world – what air would be like without choking exhaust fumes or industrial smoke.

When the wind blows from the southwest, Cleland and his team capture a sample using finely tuned instruments. Their kit is so sensitive that delivery trucks chugging down the dirt track from the nearest town – an hour away – are all logged, in case they potentially skew the readings.

While the world’s most polluted cities struggle to attract talent or manage chronic illnesses, residents around Cape Grim have made a virtue of their relatively pristine environment.

Local beef is marketed with links to scientific papers on air quality, the number of wind farms has increased, and tourism is a growing sector.

“Most waters of the world are spring waters,” he explains as he looks out over a system of tarps, sluices and reservoirs set back from the coast.

“The rain that comes off the Great Southern Ocean, that’s what we depend on,” Buckby said, adding that his remarkably sweet-tasting water is little more than H2O and trace amounts of sodium picked up from the sea.

“It will have a little bit of sodium but it’s very neutral and it’s very soft,” he said. “In normal spring water, you’ll have high magnesium, you’ll have some naturally occurring nitrates, phosphorus, potassium.”

Buckby said the monitoring station and the clean air it measures have helped local produce stand out in a competitive market.

“This probably wouldn’t work without the monitoring station at Cape Grim,” he admitted.

“Yes, we sell the romance,” he said, adding: “But look, there’s 43 years of data that says this is the cleanest mix of air in the world.”

But even Cape Grim is not immune to rising levels of pollution.

When the wind blows from the north – coming from Melbourne or Sydney – it is possible to pick up the chemical signature of individual factories in operation that day.

The facility has detected a rise in ozone depleting gases originating from as far away as China, Cleland explained.

Even the cleanest air from the southwest is changing rapidly.

“You can see over the last 2,000 years that Co2 levels in particular – but all of the major greenhouse gases – were at a fairly steady level,” he said.

Ice cores show that Co2 was around about 275 parts per million for most of the last million years.

Passing that level of four hundred parts per million earlier this decade echoed worldwide, serving as an ominous warning that climate change policies were insufficient.

The levels of carbon dioxide found at Cape Grim now are akin to those found in some towns at the start of the industrial revolution.

Cleland warned: “What we’re seeing in the atmosphere now is probably unprecedented in Earth’s history.” /kga