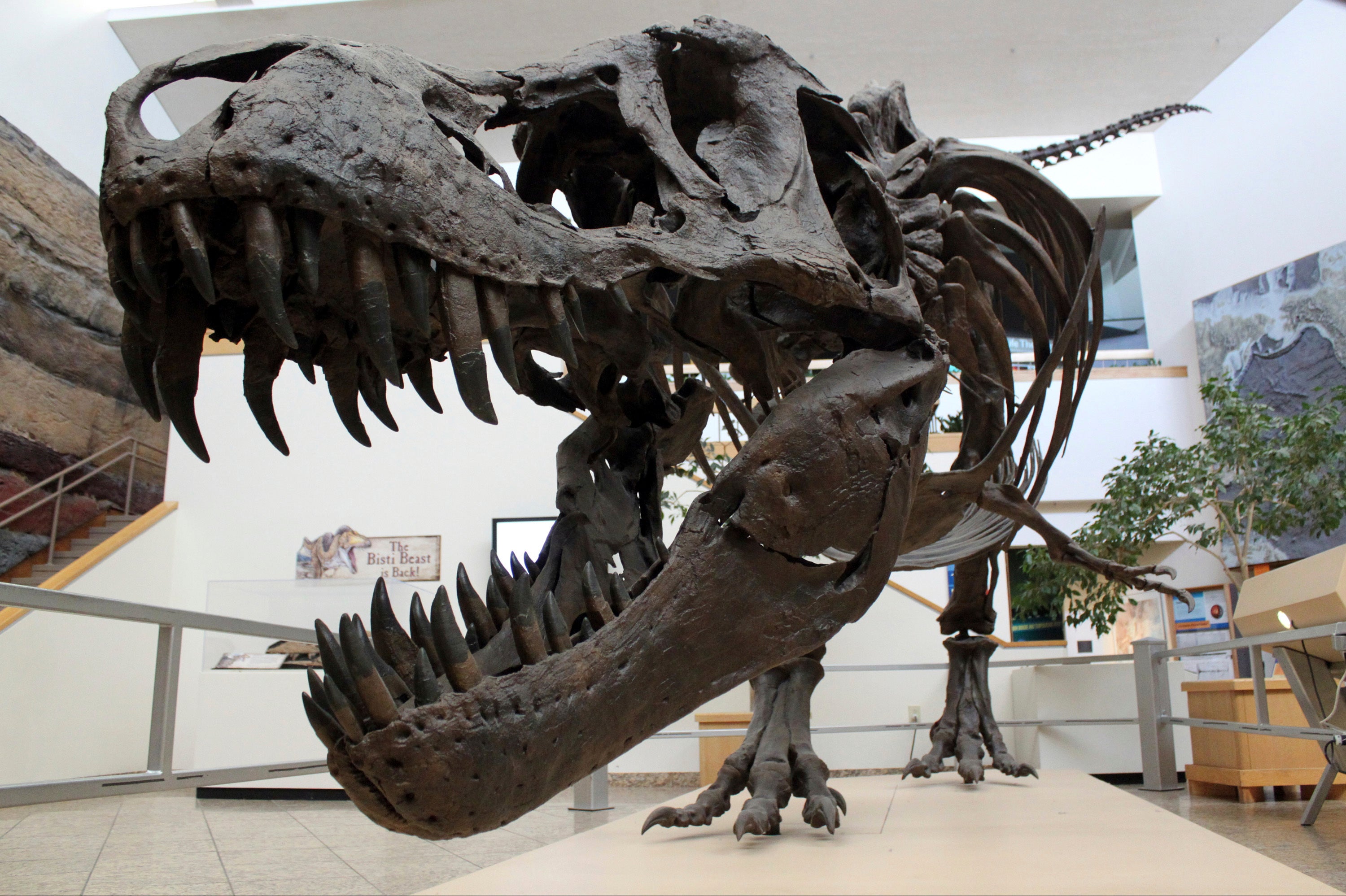 FILE – This Tuesday, Aug. 15, 2017 file photo shows a model of a Tyrannosaurus rex on display in the New Mexico Museum of Natural History and Science in Albuquerque, N.M. New research released on Friday, March 29, 2019 captures a fossilized snapshot of the day nearly 66 million years ago when an asteroid hit the Earth, fire rained from the sky and the ground shook far worse than any modern earthquake. It was the day that nearly all life on Earth went extinct, including the dinosaurs. (AP Photo/Susan Montoya Bryan)

WASHINGTON — New research released Friday captures a fossilized snapshot of the day nearly 66 million years ago when an asteroid smacked Earth, fire rained from the sky and the ground shook far worse than any modern earthquake.

It was the day that nearly all life on Earth went extinct, including the dinosaurs.

The researchers say they found evidence in North Dakota of the asteroid hit in Mexico, including fish with hot glass in their gills from flaming debris that showered back down on Earth. They also reported the discovery of charred trees, evidence of an inland tsunami and melted amber.

Separately, University of Amsterdam’s Jan Smit disclosed that he and his colleagues even found dinosaur footsteps from just before their demise.

Smit said the footprints — one from a plant-eating hadrosaur and the other of a meat eater, maybe a small Tyrannosaurus Rex — is “definite proof that the dinosaurs were alive and kicking at the time of impact … They were running around, chasing each other” when they were swamped.

“This is the death blow preserved at one particular site. This is just spectacular,” said Purdue University geophysicist and impact expert Jay Melosh, who wasn’t part of the research but edited the paper released Friday by the journal Proceedings of the National Academy of Sciences .

Melosh called it the field’s “discovery of the century.” But other experts said that while some of the work is fascinating, they have some serious concerns about the research, including the lack of access to this specific Hell Creek Formation fossil site for outside scientists. Hell Creek — which spans Montana, both Dakotas and Wyoming — is a fossil treasure trove that includes numerous types of dinosaurs, mammals, reptiles and fish trapped in clay and stone from 65 to 70 million years ago.

Kirk Johnson , director of the Smithsonian National Museum of Natural History who also has studied the Hell Creek area for 38 years, said that the work on the fish, the glass and trees “demonstrates some of the details of what happened on THE DAY. That’s all quite interesting and very valid stuff.” But Johnson said that because there is restricted access to the site, other scientists can’t confirm the research. Smit said the restrictions were to protect the site from poachers.

Johnson also raised concerns about claims made by the main author, Robert DePalma, a University of Kansas doctoral student, that appeared in a New Yorker magazine article published Friday but not in the scientific paper. DePalma did not return an email or phone message seeking comment.

For decades, the massive asteroid crash that caused the Chicxulub crater in Mexico’s Yucatan Peninsula has been considered the likely cause of the mass extinction often called the “KT boundary” for the division between two geologic time periods. But some scientists have insisted that massive volcanic activity played a role. Johnson and Melosh said this helps prove the asteroid crash case.

There were only a few dinosaur fossils from that time, but the footsteps are most convincing, Smit said.

There was more than dinosaurs, he said. The site includes ant nests, wasp nests, fragile preserved leaves and fish that were caught in the act of dying. He said that soon after fish die they get swollen bellies and these fossils didn’t show swelling.

The researchers said the inland tsunami points to a massive earthquake generated by the asteroid crash, somewhere between a magnitude 10 and 11. That’s more than 350 times stronger than the 1906 San Francisco earthquake.

Purdue’s Melosh said as he read the study, he kept saying “wow, wow, what a discovery.”

The details coming out of this are “mind-blowing,” he said.  /muf