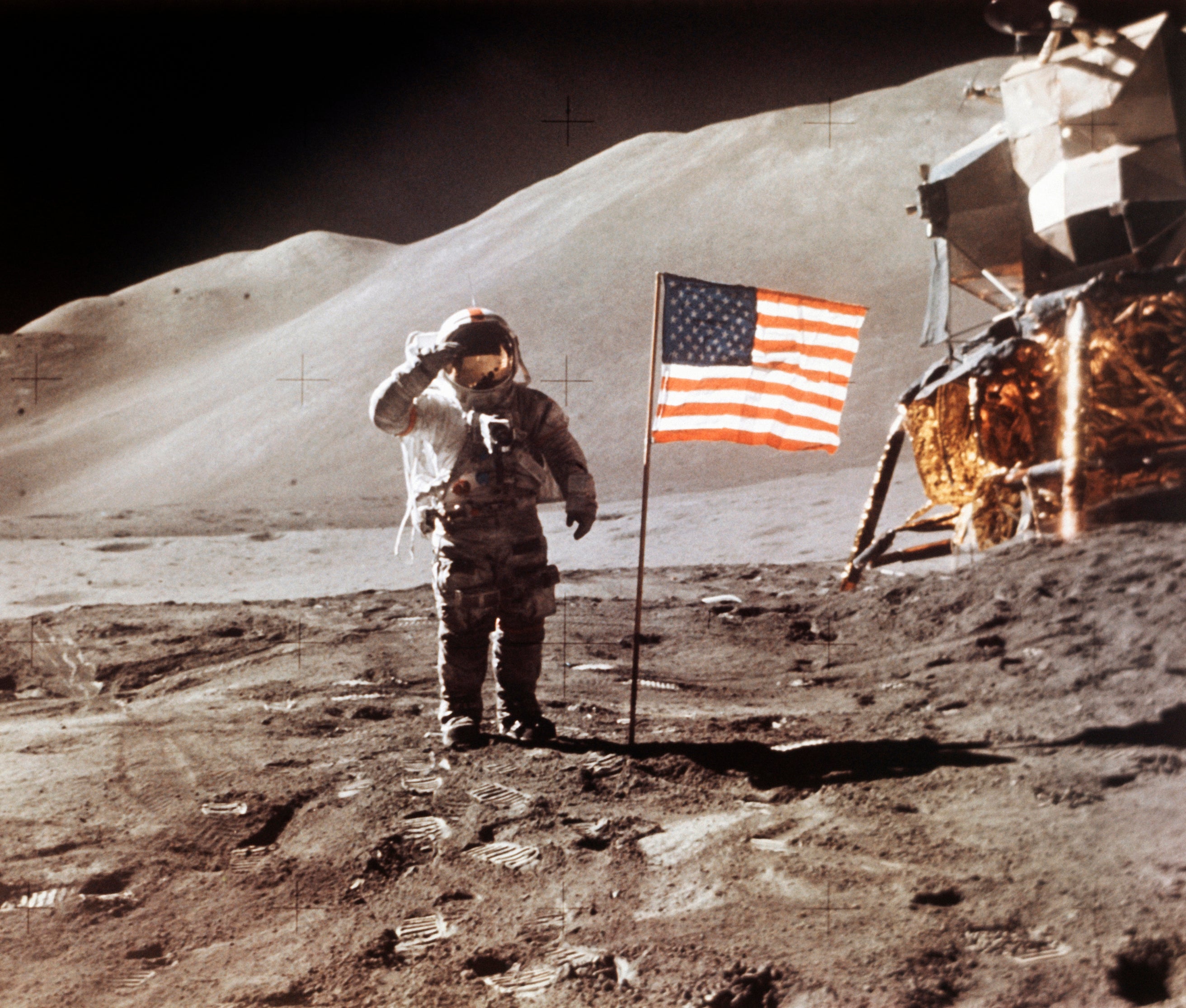 FILE – In this July 30, 1971 photo made available by NASA, Apollo 15 Lunar Module Pilot James B. Irwin salutes while standing beside the fourth American flag planted on the surface of the moon. On Tuesday, March 26, 2019, Vice President Mike Pence called for landing astronauts on the moon within five years. (NASA via AP)

WASHINGTON — For the past 15 years, America has sought to put its astronauts back on the Moon, but NASA did not think it could be done before 2028.

On Tuesday, the government of President Donald Trump set a new deadline: 2024.

But that timeframe is anything but ironclad, and would force the US space agency to upend its usual work practices and take serious risks.

Just a few weeks ago, NASA chief Jim Bridenstine said the United States was not in any space race.

But he was forced to change his tune when Vice President Mike Pence said NASA needed to put astronauts back on the Moon in 2024 “by any means necessary.”

“Make no mistake about it, we are in a space race today,” Pence said.

Bridenstine now says the acceleration of the calendar is “aggressive” but doable.

Industry experts and officials also believe it’s possible, but with a list of caveats: more money is needed, fewer tests, more help from the private sector — and some even want a change at the top of NASA.

“I assume that all means that we would need more funding in order to accomplish those goals,” one lawmaker asked.

The idea of allocating more money to NASA has some on Capitol Hill gritting their teeth.

The space agency has already spent $23 billion developing its new heavy-lift rocket (the Space Launch System, which is being built by aerospace giant Boeing), the Orion capsule to transport the astronauts (built by Lockheed Martin) and ground installations.

Orion is nearly ready but the SLS is the real bottleneck: it will be more powerful than the rockets used on the original Apollo missions to the Moon, but it is years behind schedule.

At a NASA facility in New Orleans, the first stage of the SLS prototype, expected to take flight next year, is still being assembled.

But its four engines have not yet been delivered.

That first stage is then meant to be transported via barge to St Louis for testing, before being sent to Florida for final assembly.

As for the planned June 2020 test flight, Bridenstine said: “I don’t think that’s in the cards.”

Some of the engine testing could be cancelled to gain a few months.

But that would fly in the face of the long-standing conservative work culture at NASA, which is still scarred by the Challenger and Columbia space shuttle disasters in 1986 and 2003.

“Do you want to kill astronauts? Because this is how you kill astronauts,” said Holly Griffith, a vehicle systems engineer working on the Orion capsule in Houston.

The reality of Pence’s announcement is that 2024 is politically significant: it would be the final year in Trump’s eventual second term at the White House.

“The administration has been frustrated for some time on the lack of progress on the mandate to return to the Moon,” Greg Autry, the vice president for space development at the independent National Space Society, told AFP.

“It’s clear the president wants it to happen during his second term, presuming he’s re-elected,” added Autry, who was a member of Trump’s presidential transition team.

So why has a return to the Moon taken so long — after all, Neil Armstrong made his legendary “giant leap for mankind” 50 years ago.

He says a “culture change” is needed, along with the naming of new top brass at the space agency who are “more like the president” and come from the private sector.

Technically, the new mission is markedly different from the Apollo program.

This time around, the Americans are not simply looking to plant the Stars and Stripes, but also to create a lasting infrastructure over the course of several trips, both in orbit and on the lunar surface.

Also on the agenda is learning to extract frozen water from the Moon. Uncrewed missions would take place to build the Lunar Gateway in the vicinity of the Moon and deliver equipment.

All of the above would be in preparation for eventual missions to Mars.

The other new element is that NASA wants to land at the Moon’s South Pole, where the water has been detected, as opposed to its equator, where the Apollo missions landed.

“We’re not starting from scratch,” says Marshall Smith, who manages proposals at NASA for the future lunar lander, which will ferry astronauts back and forth from the station to the Moon.

But “it’s going to be a challenge,” he admits — there is not even a design yet for the lander.

For 2024 to become a reality, NASA will need to rely heavily on private space companies, which are far more developed than they were in the 1960s and will be called upon like never before.

The shorter timetable “may require them to partner a lot more with industry,” said Thomas Orlando, the director of a NASA research center at Georgia Tech. /muf