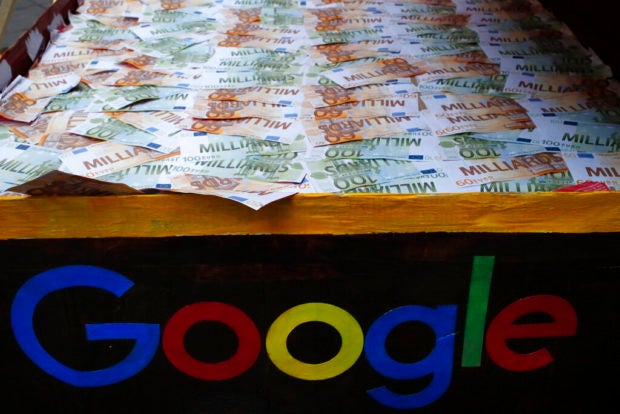 FILE – In this Jan.31, 2019 file photo, a trunk full of fake bank notes is displayed as activists from anti-globalization organisation Attac stage a protest at Google’s Paris headquarters to criticize the company’s tax evasion policies, in Paris. The French government is unveiling plans to slap a 3 percent tax on the French revenues of internet giants like Google, Amazon and Facebook. AP

VIENNA — Austria on Wednesday proposed taxing internet giants such as Google and Facebook five percent of their digital advertising revenue, a higher rate than France and other EU countries are seeking.

Austrian Chancellor Sebastian Kurz said the tax aimed to stop the “unfairness” of internet giants who have until now routed their sales through subsidiaries in low-tax EU members.

The government hopes that the new tax, which still has to be approved by parliament, will bring in 200 million euros ($225 million) per year from 2020.

It targets businesses with an annual worldwide revenue of at least 750 million euros, of which at least 25 million euros is made in Austria.

In other plans announced on Wednesday, Austria will seek to make registration mandatory for online booking platforms, including home-sharing giant Airbnb.

The current VAT exemption for articles sold online for less than 22 euros will also be abolished as part of the changes.

Early last month, France introduced a bill for a three percent “GAFA tax” — using an acronym for US giants Google, Apple, Facebook and Amazon — on digital advertising, websites and the resale of private data.

Finance Minister Hartwig Loeger said Austria wanted a higher tax rate than that in order to make up for all the years that internet giants avoided taxes.

Some of the additional money flowing to government coffers will be used to support the digitalization of Austrian media, he said.

In France, the tax is to be applied retroactively on revenue from January 1, 2019, bringing in 400 million euros to the public purse this year, and 650 million by 2022.

Other countries including Britain, Spain, Japan, Singapore and India are also working on similar schemes.

After an earlier failure to reach consensus at the European Union level, France says it is now seeking “common ground” on the issue with fellow members of the Organisation for Economic Cooperation and Development (OECD) in order to reach a worldwide accord by next year.

TOPICS: ad revenue, Amazon, Austria, Digital advertising, Facebook, Google, Internet, tax
Read Next
Researchers find more cases of Facebook app data exposure
EDITORS' PICK
Mandaluyong fire put under control hours after it started
Leveling up your ‘lutong bahay’ with the kitchen companion you never knew you needed
Bato de la Rosa, Risa Hontiveros back bill increasing female recruitment quota in PNP
Quarantine violations still punishable despite deleted provisions in ‘Bayanihan 2’ – Bato dela Rosa
Someone from the Philippines can become $356 Million richer this Tuesday
Cherry Mobile teams up with Cloud Panda PH, launches online store
MOST READ
‘If I had not been SolGen, I will make you eat your words,’ Calida tells Coco Martin
51 percent of German firms holding back investments in PH, but not because of COVID-19
5 car dealership outlets shutting down
Senate OKs bill authorizing president to postpone opening of classes beyond August
Don't miss out on the latest news and information.