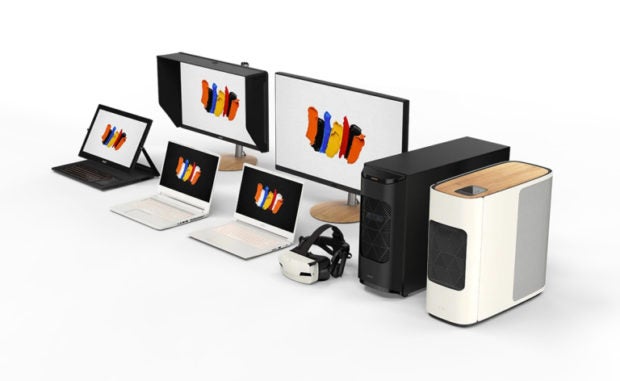 The ConceptD 900 and 500 are a premium pair of desktops featuring the highest tier NVIDIA graphics processing units (GPUs) and Intel processors capable of producing complex visual effects rendering, 3D modeling and simulations. The high number of cores allow for the duo to multitask “to the extreme” while remaining secure and reliable. Both are equipped with NVIDIA’s Creator Ready Drivers which ensure that creative applications are performing as high as possible no matter which version is being used.

The trio of ConceptD notebooks all feature 4K ultra-high definition (UHD) IPS Pantone Validated displays that make colors as true to life as possible thanks to 100% coverage of the Adobe RGB color gamut, one of the widest digital color ranges to date. Each model is nearly silent thanks to an Acer AeroBlade 3D Fan that makes the laptops as quiet as libraries.

This pair of Acer monitors produce extremely accurate colors by covering 99% of the Adobe RGB color space. While the 32-inch CM7321K has been optimized for 2D creators, the 27-inch CP7271K is for those who create 3D content.

Together with #ConceptD PCs, ConceptD OJO and StarVR One provide the most immersive and efficient tool for animators and game developers. #NextAtAcer https://t.co/tbVd2nW4Tp pic.twitter.com/UDJFXcbA63

The OJO Mixed Reality Headset has a 4,320 x 2,160 resolution display whose distance from the wearer can be adjusted for optimal viewing. Furthermore, the gap between the eyes can be made wider or narrow to increase comfort and image clarity. It has an integrated sound system and six degrees of freedom personal tracking.

The pricing and release date of the ConceptD OJO Windows Mixed Reality Headset has not yet been announced. CE/NVG

TOPICS: Acer, creators, desktops, Personal computers, Tablets
Read Next
Android system updates might soon be found right in the Play Store
EDITORS' PICK
BFP raises general alarm over Mandaluyong fire
Someone from the Philippines can become $356 Million richer this Tuesday
Cherry Mobile teams up with Cloud Panda PH, launches online store
Leveling up your ‘lutong bahay’ with the kitchen companion you never knew you needed
Bato de la Rosa, Risa Hontiveros back bill increasing female recruitment quota in PNP
Quarantine violations still punishable despite deleted provisions in ‘Bayanihan 2’ – Bato dela Rosa
MOST READ
‘If I had not been SolGen, I will make you eat your words,’ Calida tells Coco Martin
51 percent of German firms holding back investments in PH, but not because of COVID-19
5 car dealership outlets shutting down
Quarantine passes no longer required under GCQ, but curfew remains
Don't miss out on the latest news and information.