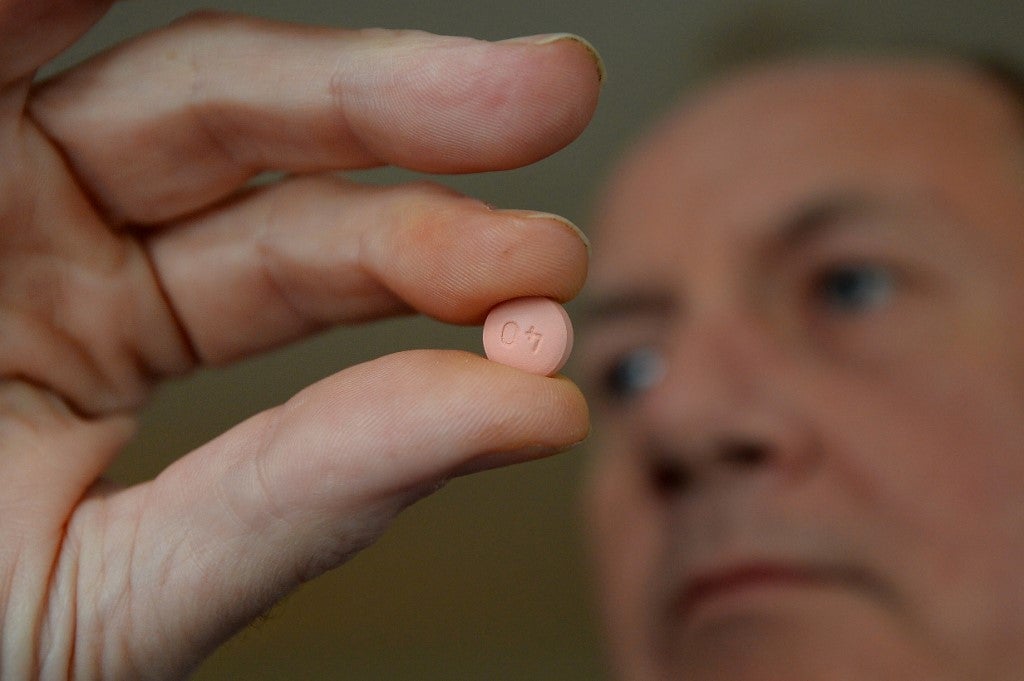 British man, Alwyn Daniel poses with a tablet of the anti-cholesterol drug Statins in London on March 21, 2014. As the home of cooked breakfasts and pints of beer, it is perhaps no surprise that Britain is the European king of anti-cholesterol drugs with some seven million users. But recommendations to widen the use of “statins” — the class of drugs used to battle cholesterol — has sparked a national debate about their merits and whether they are really a silver bullet to stave off heart attacks.  AFP

PARIS, France – Millions of patients around the world taking statins to lower the risk of heart disease fail to achieve the recommended levels of cholesterol reduction after two years of treatment, new research said Monday.

Statins – a class of medicines designed to reduce cholesterol linked to heart disease and strokes – are among the most commonly prescribed drugs in the United States and Britain.

The cholesterol-lowering industry is worth billions of dollars, but guidelines over who should take statins are often unclear.

A team of researchers in Britain reviewed public health records of 165,000 patients taking the medicine and found that fewer than one in two reached the recommended “healthy” 40 percent cholesterol reduction within two years.

“Statins do work and are effective, but some trials have highlighted there have been variations in responses among some patients,” said Ralph Kwame Akyea, research associate at the University of Nottingham’s Faculty of Medicine and Health Sciences.

“But we’ve shown there are some people not reaching this (safe cholesterol level) and the reducing of their risk is lower,” he told AFP.

In total, 51 percent of patients had an insufficient drop in cholesterol even while taking the drugs.

Akyea stressed that the study — the largest of its kind to date — could not establish why some patients responded positively to statins while others didn’t.

“Probably some people would have stopped taking their medication, maybe they had side effects,” he said.

“There might also be a role played by genetic variation. Not everyone responds to the medication and there are currently studies looking at the genetics of drug response.”

Akyea and his team suggested that better guidance and monitoring was needed to ensure those given statins were taking the correct doses for the prescribed amount of time.

He stressed, however, that statins had been shown to significantly reduce the likelihood of heart attacks and strokes in a large percentage of at-risk patients.

“Patients and society should be educated on the scientific evidence documenting the benefits of lipid lowering therapy,” said Bittencourt.

“Anti-statin propaganda based on pseudoscience should be strongly disavowed.” /cbb