Electric scooters have zipped by docked bikes in popularity 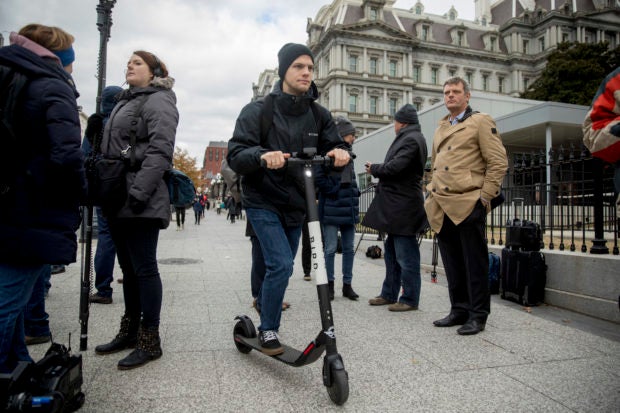 In this Dec. 4, 2018, photo a man rides a scooter near the White House in Washington. Electric scooters are overtaking station-based bicycles as the most popular form of shared transportation outside transit and cars. AP

NEW YORK — Love them or hate them, electric scooters are everywhere — zipping along city streets and littered on sidewalks, to the dismay of pedestrians and drivers who must share the road.

And now they have overtaken station-based bicycles as the most popular form of shared transportation outside transit and cars in the U.S.

Riders also took trips on 3 million dockless pedal bikes, which can be picked up and dropped off anywhere, and 6.5 million dockless electric bikes in 2018, but the report notes those numbers are declining.

One reason for electric scooters’ fast growth: companies are jockeying for strategic position in the so-called micromobility revolution, where consumers are embracing shared scooters and bikes for short trips and exploring alternatives to car ownership buoyed by the ubiquity of smartphones.

Check out the report for our full analysis of the shared micromobility landscape across the U.S., including detailed information on the number of trips taken on #bikeshare and #scooters, who's riding, trip durations, distances, and prices per ride.

Riders took 84 million trips on micromobility services in 2018, more than double the number from the year before, according to the report. Electric scooters helped drive that trend, with more than 85,000 of them available for public use in the U.S. compared with 57,000 station-based bikes.

To be sure, scooter companies face challenges from every direction, including vandalism, theft, rider injuries, intense competition and aggressive regulations in cities across the country.

There are 44 active e-scooter bills in 26 states.

"It is vital that cities retain authority over their streets. State legislators must ensure that cities have the ability to plan, regulate & manage shared micromobility for safe, sustainable & equitable outcomes." –@CorinneKisner

Yet the industry persists and venture capitalists, ride-hailing companies and traditional auto manufacturers have poured millions of dollars into the fledgling business.

The original bike-share systems in the U.S. developed after cities invited them in, said Kate Fillin-Yeh, director of strategy for the National Association for City Transportation Officials.

“In the last year-and-a-half, it’s a very different animal,” she said. “The companies are in some cases trying to beat each other to the market.”

E-bikes, while limited in rollout, have been heavily used in the cities with substantial e-bike fleets. pic.twitter.com/Eoj7EZKhYL

Car manufacturers and ride-hailing companies are taking notice, and some have made their own plays in the space with larger ambitions than scooters alone.

Uber bought Jump Bikes, an electric bike and scooter company that operates in about two dozen cities, and last year it invested $30 million in Lime, which is in more than 100 cities worldwide.

Ford, which bought scooter company Spin in November, said deploying electric scooters will help the company eventually roll out autonomous vehicles by building critical relationships with U.S. cities as they work together to craft regulations and build out infrastructure.

“In this next revolution of micromobility, the cities are taking a more active stance in how they’re going to participate,” Sunny Madra, vice president of Ford’s mobility businesses, told The Associated Press late last year. “By doing this now in advance of autonomous programs and other forms of mobility that will come up, this is a great way for us to make sure that we’re a part of the transformation of mobility.”

If it seems like electric scooters popped up overnight, that’s because they did. Several companies distributed them throughout cities without permission or permits, reminding local officials of when ride-hailing companies such as Uber launched in their markets years ago without warning.

But cities learned from that experience and have been more aggressive about regulating scooters. San Francisco, for instance, kicked out Bird, Lime and Spin and instituted a competition for permits, ultimately awarding them to relative underdogs Scoot and Skip and capping the number of scooters they could deploy. New York City does not allow shared electric scooters, although legislation has been introduce to change the rule.

As a condition for operating there, many cities are requiring scooter companies to share their troves of location data, which show where the scooters are and the routes they take. That can be valuable to plan bike routes and docking stations or to understand traffic patterns.

It also raises questions about user privacy. The location data provided to cities is not linked to names, emails or other directly identifiable information, but “if you take enough GPS data points and begin attaching other data sets, it can be used to identify specific individuals,” said Regina Clewlow, CEO of Populus, a company that helps cities securely access data for policy and planning while protecting privacy.

Another consequence of electric scooters is head injuries. Dr. Vishal Bansal, director of trauma surgery at Scripps Mercy Hospital San Diego, noticed many riders were getting on scooters at night intoxicated, without wearing a helmet, taking “30, 40 years of what we’ve learned about injury prevention and has just thrown it out the window,” he said.
“If your head hits concrete at 20 miles an hour, you are not going to get up,” said Christopher Ziebell, emergency room medical director at Dell Seton Medical Center in Austin. “These have little tiny wheels on them, so it doesn’t take much for a rider to go flying off.”

Some industry watchers wonder how long the electric scooter phenomenon will last. Veteran auto analyst Maryann Keller calls the billion-dollar valuations that have been reported for some scooter companies nonsensical. Scooters are a capital-intensive business, and there are few ways to differentiate from competitors’ models, making it hard for companies to stand out, she said.

For those wishing for the scooter fad to go, they might have to wait a little longer.