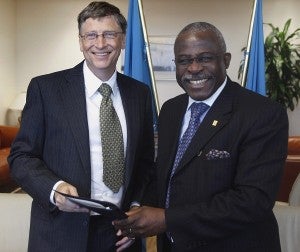 “We have to think hard about how to start taking advantage of the digital revolution that is driving innovation including in farming,” the US billionaire philanthropist said in a speech at the UN rural poverty agency IFAD in Rome.

“If you care about the poorest, you care about agriculture. We believe that it’s possible for small farmers to double and in some cases even triple their yields in the next 20 years while preserving the land,” Gates said.

He gave as one example of innovation the genetic sequencing that allows cassava farmers in Africa to predict how individual seedlings will perform, shortening the time it takes to develop a new variety from 10 years to two.

Another key development is the use of satellite technology developed by defense departments to document data about individual fields, as well as information videos of farmers discussing best practices to help others.

“If we don’t do this, we’ll have a digital divide in agriculture,” he said.

“You should go out and talk to people growing rice and say do they mind that it was created in a laboratory when their child has enough to eat?” he told reporters at a small media roundtable after his speech.

“The change in the way mankind lives over the last several hundred years is based on adoption of innovative practices and we simply haven’t done enough for those in the greatest need to bring these things,” he said.

On the issue of land investments that are referred to by their critics as “land grabbing,” he said: “It’s not actually possible to grab the land. People don’t put it on boats and take it back to the Middle East.

Gates also unveiled $200 million (150 million euros) in new grants from his foundation to finance research on a new type of drought-resistant maize, a vaccine to help livestock farmers and a project for training farmers.

“Investments in agriculture are the best weapons against hunger and poverty,” he said, adding that his charitable foundation had committed $2.0 billion for farmers and was working on seven crops and one livestock vaccine.

Gates called for a new system of “public scorecards” for developing countries and UN food agencies that would measure things like agricultural productivity, the ability to feed families and farmer education systems.

“It’s something that can be pulled together over the next year,” he said.

“When I meet with an African leader, I’d love to have that report card. I have a report card for health…. Without the scorecards, the donors tend to fund fad-oriented, short-term things,” he told reporters.

The technology pioneer also criticized the work of the UN food agencies in Rome: the Food and Agriculture Organization (FAO), the World Food Program (WFP) and the International Fund for Agriculture and Development (IFAD).

He said the current food and farming aid system was “outdated and somewhat inefficient” with a lot of “duplication.”

For these organizations to go digital will take “a lot of time,” he said.

Asked about the need for wider reforms of capitalism to help the poor, he said: “How do you get rid of its excesses, including the finance people who are paid these huge salaries, without hurting the beneficial things?”

He added: “I wish those Wall Street traders would have gone… and worked on maize and used their mathematical models to look at phenotype versus genotype. It’s clearly imperfect but it’s the best system we have.”