CAPE CANAVERAL, Fla. – NASA’s InSight lander has picked up a gentle rumble at Mars, believed to be the first marsquake ever detected. 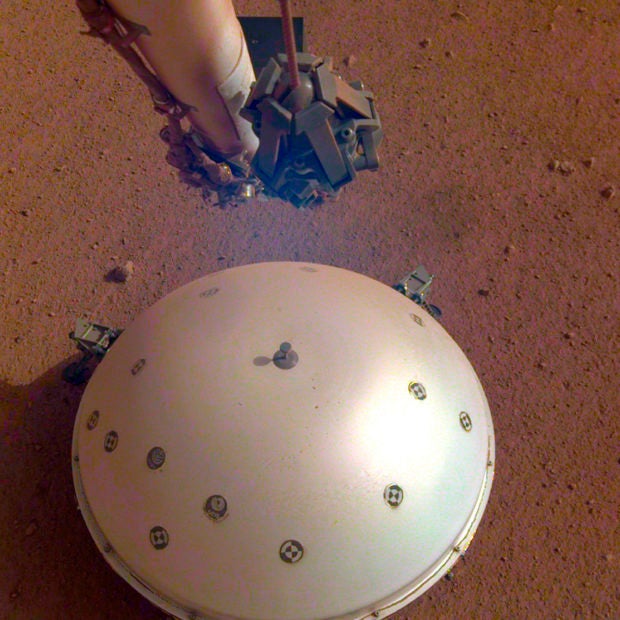 This photo made available by NASA on Tuesday, April 23, 2019 shows the InSight lander’s domed wind and thermal shield which covers a seismometer on the 110th Martian day, or sol, of the mission. On Tuesday, the space agency announced the instrument picked up a gentle rumble, believed to be the first marsquake ever detected. (NASA/JPL-Caltech via AP)

While the rumble sounds like soft wind, scientists believe it came from within the red planet.

The Paris Institute of Earth Physics’ Philippe Lognonne, who’s in charge of the experiment, said it’s exciting to finally have proof that Mars is still seismically active.

Mars is not nearly as geologically active as Earth and, like our moon, lacks tectonic plates.

“We’ve been waiting months for a signal like this,” Lognonne said in a statement.

InSight’s lead scientist, Bruce Banerdt of NASA’s Jet Propulsion Laboratory in Pasadena, California, said this carries out the scientific work begun by the Apollo moonwalkers nearly a half-century ago.

The astronauts left behind seismometers that measured thousands of moonquakes.

As for Mars, “we’ve been collecting background noise up until now, but this first event officially kicks off a new field: Martian seismology!” ”Banerdt said in a statement.

Researchers are still analyzing the data, as well as three other even fainter seismic signals detected since mid-March.

By analyzing marsquakes, scientists hope to learn more about how rocky planets formed.

The French seismometer was placed directly on the Martian surface in December, a few weeks after the spacecraft landed.

The German-built drilling instrument — dubbed the mole — has managed to penetrate only a foot or two (50 centimeters) into Mars, far short of its goal to measure the planet’s internal temperature.

Engineers are still trying to figure out why and how the device got stuck. /gsg