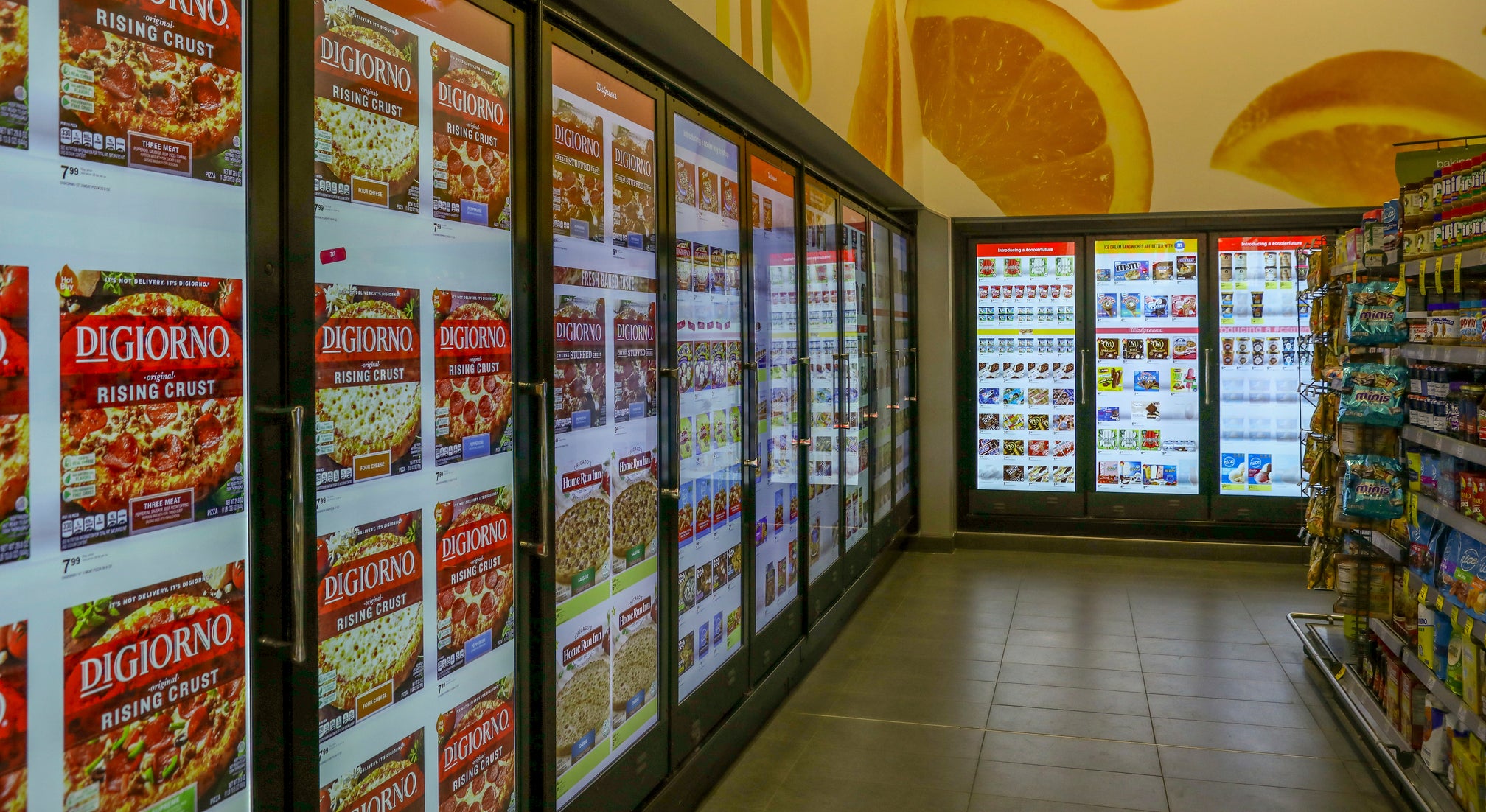 This March 7, 2019, photo shows a smart shelf area at Walgreen’s in Chicago. Walgreens, which has more than 8,000 drugstores, installed cooler doors with cameras and sensors at six locations in Chicago, New York, San Francisco and Bellevue, Washington. Instead of the usual clear glass doors that allow customers to see inside, there are video screens that display ads along with the cooler’s contents. (AP Photo/Teresa Crawford)

NEW YORK — Eyeing that can of soda in the supermarket cooler? Or maybe you’re craving a pint of ice cream? A camera could be watching you.

But it’s not there to see if you’re stealing. These cameras want to get to know you and what you’re buying.

It’s a new technology being trotted out to retailers, where cameras try to guess your age, gender or mood as you walk by.

The intent is to use the information to show you targeted real-time ads on in-store video screens.

Companies are pitching retailers to bring the technology into their physical stores as a way to better compete with online rivals like Amazon that are already armed with troves of information on their customers and their buying habits.

With store cameras, you may not even realize you are being watched unless you happen to notice the penny-sized lenses. And that has raised concerns over privacy.

“The creepy factor here is definitely a 10 out of 10,” said Pam Dixon, executive director of the World Privacy Forum, a nonprofit that researches privacy issues.

At the National Retail Federation trade show in New York earlier this year, a smart shelf on display by Mood Media tried to detect “happiness” or “fear” as people stood in front it—information a store could use to gauge reaction to a product on the shelf or an ad on a screen.

Cineplex Digital Media showed off video screens that can be placed in malls or bus stops and try to tell if someone is wearing glasses or sporting a beard, which, in turn, can be used to sell ads for new frames or razors.

The screens can also be placed at the drive-thru. A minivan pulling into a fast food restaurant, for example, might get an ad for a family-sized meal on the video screen menu.

For now, the cameras are in just a handful of stores.

Kroger, which has 2,800 supermarkets, is testing cameras embedded in a price sign above shelves in two stores in the suburbs outside Cincinnati and Seattle.

Video screens attached to the shelves can play ads and show discounts. Kroger said the cameras could guess a shopper’s age and sex but the information was anonymous and the data were not being stored.

If the tests work out well, the company said it could expand it into other locations.

Walgreens, which has more than 8,000 drugstores, installed cooler doors with cameras and sensors at six locations in Chicago, New York, San Francisco and Bellevue, Washington.

Instead of the usual clear glass doors that allow customers to see inside, there are video screens that display ads along with the cooler’s contents.

Above the door handle is a camera that can try to guess ages and track irises to see where you are looking, but Walgreens said those functions were off for now.

The company said the cameras were currently being used to sense when someone was in front of the cooler and count the number of shoppers passing by. It declined to say if it would turn on the other functions of the camera.

“All such enhancements will be carefully reviewed and considered in light of any consumer privacy concerns,” Walgreens said.

Advocates of the technology say it could benefit shoppers by showing them discounts tailored to them or drawing attention to products that are on sale.

But privacy experts warn that even if the information being collected is anonymous, it can still be used in an intrusive way.

For instance, if many people are eyeing a not-so-healthy dessert but not buying it, a store could place it at the checkout line so you see it again and “maybe your willpower breaks down,” said Ryan Calo, a professor at the University of Washington School of Law and codirector of its Tech Policy Lab.

“Just because a company doesn’t know exactly who you are doesn’t mean they can’t do things that will harm you,” Calo said.

The technology could also lead to discriminatory practices, like raising prices when an older person walks in or pushing products based on your perceived mood such as ads for antidepression medication if the cameras think you look sad, adds Dixon of the World Privacy Forum.

“We shouldn’t be gathering the emotional state of anyone,” Dixon said.

At a Walgreens in New York, a sign above a rack of wines said the store was testing cameras and sensors that “do not identify you or store any images.”

The sign doesn’t say where the cameras or sensors are, but it does have a web address for the privacy policy of Cooler Screens, the company that makes the doors.

Calvin Johnson, who was looking for a Snapple, said he visited the store before, but didn’t notice the cameras until a reporter pointed them out.

Another shopper, Ray Ewan, said he noticed the lenses while grabbing a Diet Coke, but wasn’t concerned since cameras were hard to avoid.

“There’s one on each corner,” Ewan said.

Not all retailers are keen on adding embedded cameras. Walmart’s Sam’s Club, which is testing shelves with digital price tags, is cautious about them.

“I think the most important thing you do with tech like that is to make sure people know,” said John Furner, Sam’s Club’s CEO. “You don’t want to surprise people on how you use technology or data.”

TOPICS: smart cameras
Read Next
Vine descendant’s launch right around the corner
EDITORS' PICK
BFP raises general alarm over Mandaluyong fire
Someone from the Philippines can become $356 Million richer this Tuesday
Cherry Mobile teams up with Cloud Panda PH, launches online store
Leveling up your ‘lutong bahay’ with the kitchen companion you never knew you needed
Bato de la Rosa, Risa Hontiveros back bill increasing female recruitment quota in PNP
Quarantine violations still punishable despite deleted provisions in ‘Bayanihan 2’ – Bato dela Rosa
MOST READ
‘If I had not been SolGen, I will make you eat your words,’ Calida tells Coco Martin
51 percent of German firms holding back investments in PH, but not because of COVID-19
Quarantine passes no longer required under GCQ, but curfew remains
5 car dealership outlets shutting down
Don't miss out on the latest news and information.