China to build moon station in ‘about 10 years’ 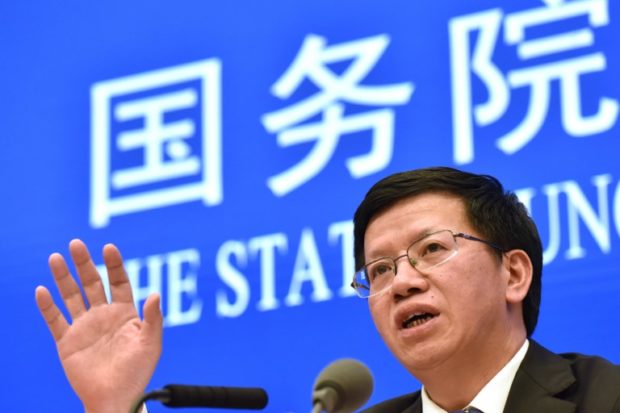 Wu Yanhua, vice administrator of the China National Space Administration and deputy chief commander of the China Lunar Exploration Programme, speaks at a press conference about China’s Chang’e-4 moon probe in Beijing on January 14, 2019. – The Chang’e-4 probe made the world’s first soft landing on the moon’s “dark side” on January 3, a major step in China’s ambitions to become a space superpower. AFP FILE PHOTO

BEIJING — Beijing plans to send a manned mission to the moon and to build a research station there within the next decade, state media reported Wednesday, citing a top space official.

China aims to achieve space superpower status and took a major step towards that goal when it became the first nation to land a rover on the far side of the moon in January.

He also added that Beijing plans to launch a Mars probe by 2020 and confirmed that a fourth lunar probe, the Chang’e-5, will be launched by the end of the year.

Originally scheduled to collect moon samples in the second half of 2017, the Chang’e-5 was delayed after its planned carrier, the powerful Long March 5 Y2 rocket, failed during a separate launch in July 2017.

China on Wednesday also announced its Long March-5B rocket will make its maiden flight in the first half of 2020, carrying the core parts of a planned space station.

#China and @UNOOSA signed a declaration on international space cooperation – researchers from countries all over the world will be able to use the China Space Station. 🌌 🚀 🛸 https://t.co/zalczln7Pg pic.twitter.com/cJJpdwvOCx

The Tiangong — or “Heavenly Palace” — will go into orbit in 2022, the China Manned Space Engineering Office said.

It is set to replace the International Space Station — a collaboration between the United States, Russia, Canada, Europe and Japan — which is due to be retired in 2024.

Beijing last week also said it would launch an asteroid exploration mission and invited collaborators to place their experiments on the probe.

The current Chang’e-4 moon lander carried equipment from Germany, the Netherlands and Sweden.

China now spends more on its civil and military space programs than do Russia and Japan, and is second only to the United States. Although opaque, its 2017 budget was estimated at $8.4 billion by the Organization for Economic Cooperation and Development.