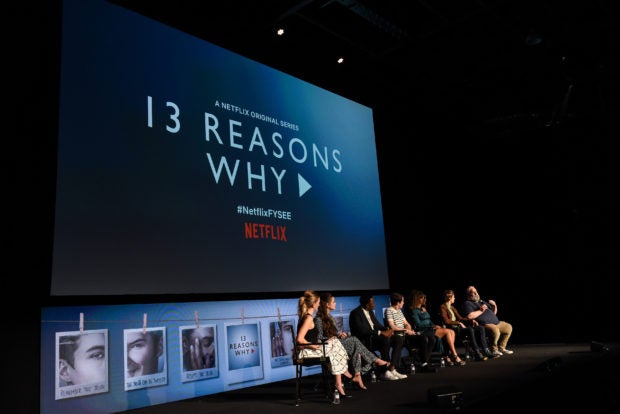 In this file photo taken on June 1, 2018 Actors Katherine Langford, Derek Luke, Dylan Minnette, Alisha Boe, Miles Heizer and Brian Yorkey attend #NETFLIXFYSEE Event For “13 Reasons Why” Season 2 – Inside at Netflix FYSEE At Raleigh Studios in Los Angeles. – A study into the impact of the controversial Netflix drama “13 Reasons Why” has found there was a spike in suicides among US teenagers in the months following its release. AFP FILE PHOTO

LOS ANGELES — The suicide rate among US teenagers spiked in the months after the release of the controversial Netflix drama “13 Reasons Why“, which follows the story of a high school girl who kills herself, a new study has found.

The series was met with concern when it aired in March 2017, with health and education professionals fearing the content was potentially harmful for vulnerable populations, such as adolescents.

Get you a partner you can work out with. pic.twitter.com/MAx3KDS4AY

According to the new study, researchers estimated there were an additional 195 suicide deaths — an increase of nearly 29 percent — among 10 to 17 year-olds in the nine months after its release.

The number of suicide deaths among the same age category “increased significantly” in the month immediately after it hit screens, said the paper, published in the Journal of the American Academy of Child and Adolescent Psychiatry.

The researchers however were not able to establish a causal link between viewing the television series and the increase in suicides and acknowledged other factors may have played a role.

Author of the report Jeffrey Bridge, who led the research team from the Nationwide Children’s Hospital in Ohio, told AFP that the Netflix drama portrayed the lead character’s suicide in a sensationalized manner.

“It is very concerning that a graphic depiction of the method of Hannah’s suicide was shown, which can be traumatic for survivors of suicide loss or suicide attempt and also provides a particular pathway for suicide in some cases,” he said.

“The results of this study confirmed concerns about how the series disregarded best practice guidelines for depicting suicide in the media.”

The study found no significant change in the level or trend of suicides among 18 to 64 year-olds.

A previous study had already suggested a 19 percent increase in internet searches concerning suicide in the days after “13 Reasons Why” was released.

Netflix, which has renewed the drama for a third season, said it was “looking into the research”.

“This is a critically important topic and we have worked hard to ensure that we handle this sensitive issue responsibly,” a Netflix spokesperson said.

The Department of Health (DOH) reminded the public, especially those who may have mental health issues, that they can contact the DOH’s 24/7 Hopeline to either help them unburden their emotional baggage or to seek professional help. Hopeline can be reached via hotlines 804-HOPE (4673); 0917-558-HOPE (4673); or 2919 (toll-free number for Globe and TM subscribers).