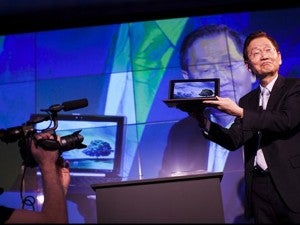 BARCELONA—Mobile phone makers used to sell the ‘small is beautiful’ concept but at this year’s world mobile fair, some are inching toward tablet sizes amid a shift to a new hybrid category.

South Korean maker LG’s new Optimus Vu, for example, has a five-inch display, much larger than most smartphones in the market today.

The iPhone, to name one of the most popular, has a 3.5-inch display.

“It’s a product that is in between the two,” explained Daniel Hernandez, the group’s Europe marketing director.

“We believe there is a market, because it is a product that is both a tablet and a smartphone,” he told AFP.

Scheduled for launch at the end of 2012, the Optimus Vu is not the only one of this format.

As smartphones offer more and more functions, manufacturers are offering bigger screens to enhance the gaming or video viewing experience.

But not all analysts are convinced by the hybrid size.

“We’re not great believers that the form factor will be particularly successful, because it’s not one or the other. It’s too big to be a smartphone and too small to be a proper tablet,” said Carolina Milanesi, from Gartner research firm.

Nevertheless, she believes that there is a link between the two markets. “In the way the consumer uses it and in the way the operating system works, they are one market; in fact, a study showed that over 30 percent of the applications used on mobiles and tablets are the same.”

Milanesi does not see either format cannibalizing the other, but believes they could generate “some price pressure: maybe if I spend $500 on a tablet, I might not need to have the latest and greatest smartphone.”

Others believe that tablets’ prices could dip closer to those of phones.

“We will see a competing market with tablets at between $100 and $200, whereas today, we are in a market of between $500 and 700,” said Ariane Bucaille, Deloitte analyst.

Rather than go for a hybrid, Asus, which was at the forefront of the netbook revolution, decided to bring two separate objects into a “Padfone” to be available in the market from April.

The gadget, which looks like a standard tablet, has a space for a mobile telephone to slot in the back of the screen.

It thus shares the same memory and SIM card, allowing video calls to be made on a larger screen.

“This is an ultimate transformation, the combination of phone, pad and notebook, with a seamless transition.

“What’s more exciting than being always connected,” he asked.