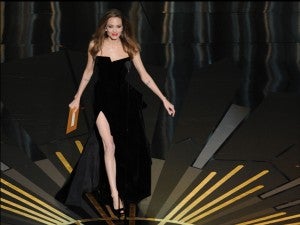 Jolie raised eyebrows, and probably temperatures, by exposing a thigh in a gown with a full-length slit while presenting one of the award’s at Sunday’s nights Oscars show in Hollywood.

Within less than an hour someone had created @AngiesRightLeg — subhead: “I am Angelina Jolie’s right leg” — and by Monday morning the Twitter feed had more than 15,500 followers.

“Look at me!” said the leg, 45 minutes after Jolie shimmied onto the stage to present the best adapted screenplay Oscar, flirting shamelessly with the camera by holding her leg just so.

J Lo’s nipple took to Twitter even more quickly than Jolie’s leg: according to time stamps on @JLosNipple — subhead: “Did you see me?” — and the Oscars running order, the nipple tweeted within minutes of being allegedly exposed.

“J Lo’s not to blame, I couldn’t breathe,” said one of its first tweets, accompanied by a picture of the alleged wardrobe malfunction — which, it must be said, was less clear-cut than Jolie’s deliberate fashion statement.

Perhaps because of its questionable exposure, @JLosNipple was not as popular as AngiesRightLeg — it had only about 2,500 followers by late morning Monday, LA time.

“The leg had much more airtime….I was stunted by network TV. Curse you Janet Jackson!” it protested, in a reference to Jackson’s infamous accidental nipple exposure at the 2004 Super Bowl.