Mahathir says Malaysia will use Huawei ‘as much as possible’ 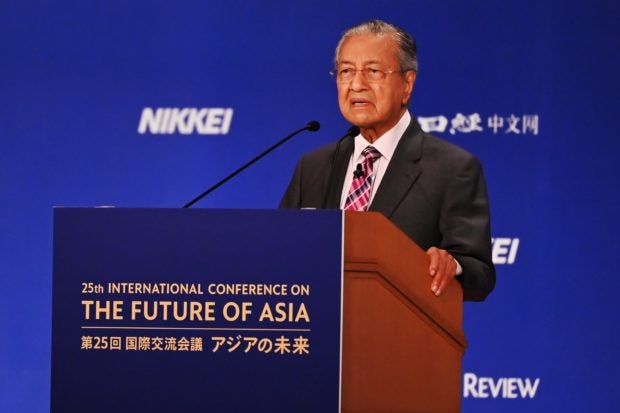 Malaysia’s Prime Minister Mahathir Mohamad delivers a speech during the 25th International Conference on the Future Of Asia in Tokyo on May 30, 2019. AFP

TOKYO — Malaysia will continue using Huawei products “as much as possible,” bucking a global trend prompted by security concerns and a US ban on the Chinese firm, the country’s prime minister said Thursday.

Mahathir Mohamad, speaking at a conference in Tokyo, acknowledged the security concerns but said they would not deter Malaysia.

“Yes, there may be some spying. But what is there to spy (on) exactly in Malaysia? We are an open book,” the 93-year-old said at the Future of Asia forum.

Mahathir said Huawei had access to research “far bigger than the whole of Malaysia’s research equivalent.”

“So we try to make use of their technology as much as possible.”

“Everybody knows, if any country wants to invade Malaysia, they can walk through, and we will not resist because it’s a waste of time,” he added.

His comment came after a wave of controversy over the Chinese telecommunications firm, which has been hit by allegations of espionage and faces a US ban.

A number of countries have blocked Huawei from working on their mobile networks and companies have stepped back from the firm after the US ban, citing legal requirements.

The spat comes as the United States and China raise tariffs in tit-for-tat moves along with blistering rhetoric accusing each other of unfair trade practices.

Mahathir warned about the heated exchanges between Beijing and Washington, which come as the powers and their allies lock horns in the hotly contested South China Sea.

Mahathir said the United States and “the West” must accept that Asian nations now produce competitive products, and should not “threaten” business rivals.

“Yes, I understand Huawei has tremendous advance(s) over American technology even,” he said.

“The US must compete with China. At times China will win, other times the US will win,” he said.

He warned that the tense relations between the US and China might impact the situation in the South China Sea, where China claims sovereignty despite rival claims from other regional nations.

And he urged calm in the area, warning that small incidents could easily escalate into violence.