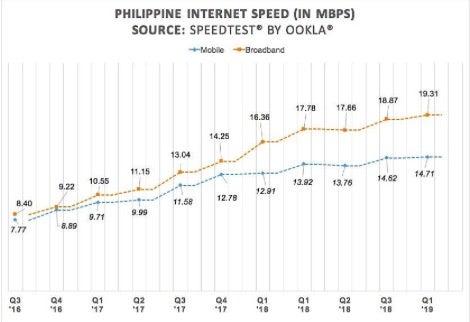 Speed test reports by OOKLA showed that fixed broadband internet speeds in the country improved from 8.40 Megabits per second (Mbps) in the third quarter of 2016 to 19.31 Mbps in the first quarter of 2019.

For April 2019, OOKLA noted that mobile and fixed broadband internet speeds in the country stood at 14.73 Mbps and 18.66 Mbps, respectively.

Acting Secretary Eliseo Rio Jr., of the Department of Information and Communications Technology (DICT), earlier said that telecommunications companies have pledged to provide better services to the public.

“Well, the incumbent telcos have to improve their services because the new major telco player has committed 27 Mbps Internet speed in their first year of operation and 55 Mbps speed in the succeeding years, with a performance bond to back up their commitment,” Rio told INQUIRER.net.

“Globe and Smart/PLDT have put up one of their biggest Capex (capital expenditures) in their more than two decades of operation to prepare for the competition coming from the third telco,” he added. (Editor: Jonathan P. Vicente)