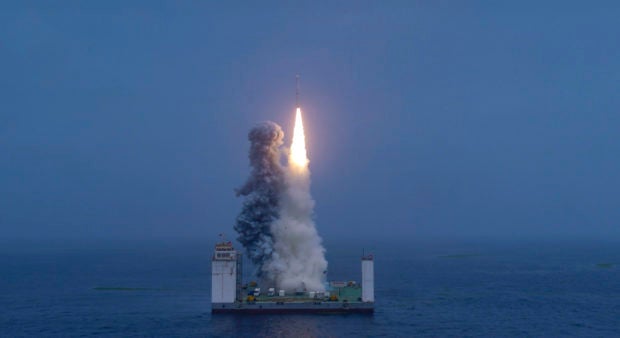 At 12:06 on June 5, 2019, CZ-11 Solid-fuel Space Launch Vehicle (CZ-11 WEY), jointly named by CASC and a corporate brand, sees its first sea launch on the Yellow Sea, successfully sending seven commercial satellites into a circular orbit of about 600 kilometers, including Bufeng No.1 A/B Satellite, China125 No. 1 A/B Satellite, Jilin No. 1 High-definition 03A Satellite, Tianqi No. 3 Satellite and Xiaoxiang No. 1 04 Satellite. Business Wire via AP

BEIJING — China launched a space rocket from sea for the first time on Wednesday, its space agency announced, the latest step in Beijing’s push to become a major space power.

The Asian giant now spends more than Russia and Japan on its civil and military space programs — unveiling ambitious plans for missions to the moon and beyond in the coming decade.

A Long March 11 rocket was launched from a ship in the Yellow Sea just after midday, the China National Space Administration said in a statement.

“This is the first time that China has… (tested a) launch vehicle at sea,” it added.

The rocket carried two experimental satellites and five commercial ones.

State broadcaster CCTV, in a post on the Twitter-like Weibo platform, hailed it as “a new launching mode for China to enter space quickly”.

The test marks another win for Beijing’s space program.

Earlier this year, China became the first nation to land a rover on the far side of the moon.

It also unveiled ambitious plans to build a research base on the lunar surface, send a probe to Mars and build a space station in Earth orbit.

In 2003, China became only the third nation to have the capability of launching humans into space.

And with sea launches, China now has the ability to deploy satellites from a mobile platform.

Most recently, Russian-backed firm Sea Launch used a floating platform to launch dozens of rockets between 1999 and 2014.

According to Russian company Energia, the majority shareholder in Sea Launch, launching from sea has a number of advantages, such as the ability to send off rockets from a variety of locations on Earth, as well as reduced costs and risks.