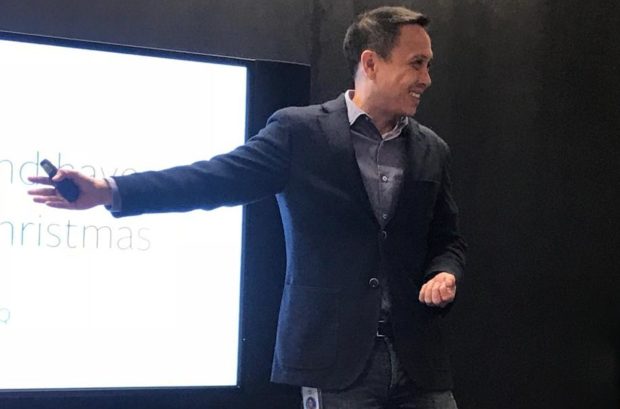 Facebook Philippines’ Country Director John Rubio points to the data he shares during a presentation of a study about the online shopping habits of Filipinos. INQUIRER.net file photo / Daphne Galvez

MANILA, Philippines — The number of short digital diary entries online have been on the rise, according to a recent survey commissioned by social media giant Facebook.

Speaking in a press circle AT their home office in Taguig City, Facebook Philippines Country Director John Rubio attributed this rise to how Stories provide interaction and promote authenticity.

“You do it [Stories] really fast. You don’t really think about. It’s like your authentic self goes there…People love it because it’s full screen, it’s immersive, it’s ephemeral,” he said.

“It’s a very short form. So it’s quick, it’s very playful, interactive. You can have polls…it’s very authentic,” he added.

In a survey commissioned by Facebook in August 2018 regarding Stories, around 75 percent of the 1,526 surveyed Filipinos who viewed or shared Stories said they used it at least once a week.

The 2018 survey had 7,720 self-reported Facebook family of apps (Facebook, Instagram, Messenger, or WhatsApp) Stories users aged 13 to 54 in the Asia-Pacific region (Australia, India, Indonesia, Philippines, Thailand). A total of 1,526 were from the Philippines.

The poll also showed that 78 percent said they experienced new things outside their everyday lives when using or viewing Stories while 69 percent said it helps them take a mental break.

“Very relaxing…When I have a minute, so waiting outside or checking a few stories, 5, 10, 15 seconds max, you go through a lot of stories,” Rubio said.

According to Rubio, Stories had made it at the forefront of Facebook’s family of applications.

“If you’ve noticed, over time, when we’ve done our redesign, stories now exists at the top banner of Instagram. Just below ‘What’s on your mind?’ It’s actually also on the top of Messenger,” he said.

“All our platforms, we’ve actually made it (Stories) at the forefront because we’ve seen this rapid increase not just of the number of people using it, but, for example, the number of stories that people put… I’m sure you have friends who probably… you know, my three stories per day. I have friends that that’s just their first 30 minutes of waking up,” he added.

As of March 2019, Facebook has around 1.56 billion daily active users globally.

Based on Instagram data as of January 2019, 500 million accounts on the photo-sharing app use Instagram Stories daily.

Meanwhile, 300 million people are daily active users of Facebook and Messenger Stories as of August 2018.

Dominguez: ‘Onerous’ prime land deal under review along with others OKd by Duterte predecessors