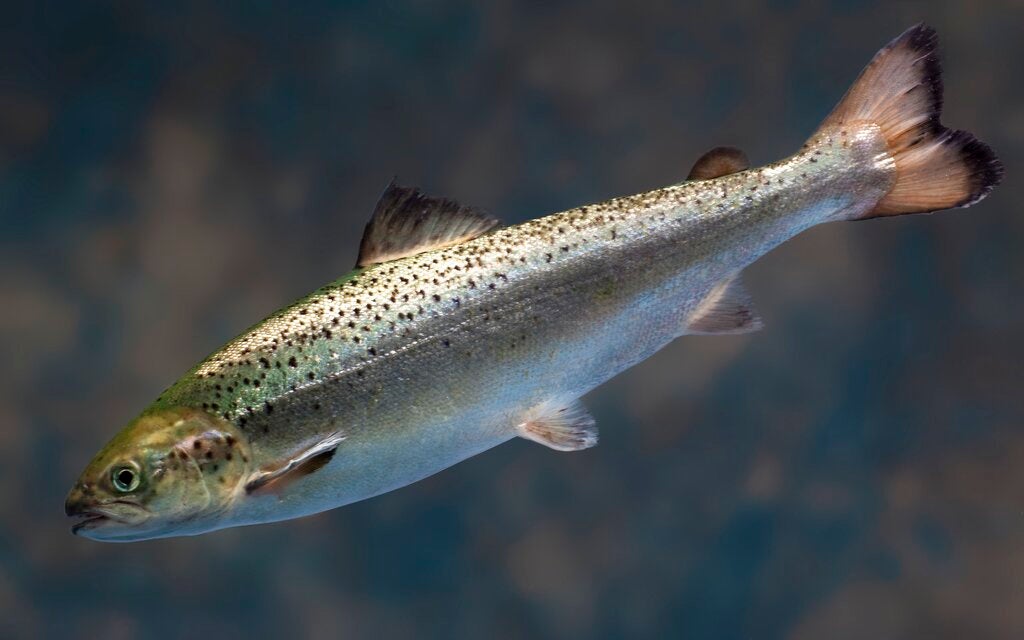 This 2009 photo provided by AquaBounty Technologies shows a juvenile salmon raised at the company’s hatchery in Fortune, Prince Edward Island, Canada. The federal government has cleared the way for the fish to be sold in the US, but fish farmers in Maine haven’t shown an interest in growing it. (AquaBounty Technologies via AP)

PORTLAND, Maine — Genetically engineered salmon is heading to store shelves in the U.S., but it won’t be coming from the biggest salmon farming state in the country.

Massachusetts-based AquaBounty Technologies has said American supermarkets could begin selling the much-debated fish by the end of next year. Its fish are modified with added genes from other fish to grow about twice as fast as conventional salmon.

The company modifies Atlantic salmon, a species that forms the backbone of the worldwide salmon aquaculture industry. Maine is the biggest producer of conventional Atlantic salmon in the U.S., sometimes producing more than 35 million pounds (15.9 million kilograms) of salmon per year, and its industry is poised to grow. Two new major salmon farms are in the approvals process in the state.

But fish farmers in Maine are not considering using the genetically engineered fish, said Sebastian Belle, executive director of the Maine Aquaculture Association. Numerous conditions would have to be met before that would change, including customers requesting the fish in stores, he said. The group also feels the environmental assessment of the fish conducted by regulators was not rigorous enough, Belle said.

AquaBounty’s salmon is the first genetically modified, or GMO, animal to be approved for human consumption. It has become a touchstone for the international debate about genetic engineering and food. The U.S. Food and Drug Administration has signed off on the fish as safe to eat. The genetically modified salmon are also approved for sale in Canada.

The company’s Indiana facility recently received the first batch of genetically engineered salmon eggs in the U.S., and they should be ready for harvesting in the final quarter of 2020, said AquaBounty spokesman Dave Conley.

Other growers hoping to use the technology will face hurdles, he said. Fish farmers who want to use the eggs need FDA-approved, land-based facilities with containment features, and they will face regulatory oversight, he said.

Genetically engineered salmon have faced numerous regulatory delays since a Canadian research team first developed them in the 1980s. Conley has said the goal of genetically modifying the fish is to “produce food more efficiently and more responsibly.”

But consumers, fish farmers and retailers are slow to warm to the idea. Some retail chains have flatly refused to sell the genetically engineered fish. The International Salmon Farmers Association issued a statement years ago that it “firmly rejects” the idea because of environmental concerns. The group’s president, Trond Davidsen, said that position still holds.

Nordic Aquafarms, a Norwegian firm, is planning a salmon farming operation in Belfast, Maine, that would be one of the largest in the United States. Erik Heim, the company’s president of U.S. operations, said genetically engineered fish are not part of the plan.

“Based on practices and knowledge of consumers in our market at least, our decision is we will not pursue that,” Heim said. “It’ll be interesting to see how that goes with them.”