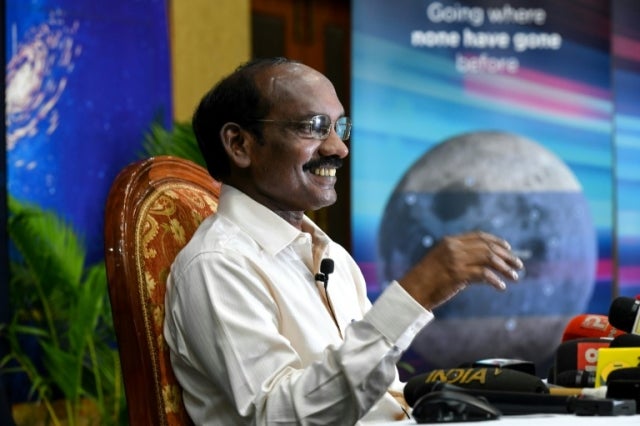 Indian space chief Kailasavadivoo Sivan said the country plans to have a space station in operation within the next decade. Image: MANJUNATH KIRAN – AFP

India plans to establish its own “very small” space station in the next decade as the country gears up for a first manned mission beyond earth.

“Our space station is going to be very small… useful to carry out experiments,” Sivan told reporters in New Delhi.

“We are not having a big plan of sending humans on tourism and other things,” he added.

A space station is capable of hosting crew members for years on end, and provides facilities for experiments and support vehicles to dock.

India’s first manned space mission — named Gaganyaan — is due to take place by 2022, in time to commemorate 75 of years of the country’s independence from Britain.

It will have two or three astronauts on a maximum seven-day mission.

The Indian announcement comes a day after the country unveiled an unmanned moon lander expected to be launched on July 15 for a touchdown on the lunar surface around September 6.

India successfully sent a first lunar mission to space in 2008, playing a crucial role in the discovery of water molecules on the moon.

The country has made giant strides on its space journey in recent years and has been a pioneer in low-cost technology.

NASA to open International Space Station to tourists from 2020

TOPICS: India, lunar mission, Space mission, Space Station
Read Next
Even lab monkeys need retirement funds
EDITORS' PICK
LIST: What to expect in areas under GCQ, MGCQ
PNP to maintain checkpoints during GCQ to ensure compliance to health protocols
Notice of 2020 regular meeting of stockholders June 18, 2020
DOTr bares 2 phases of public transport revival in GCQ areas
SM prepares for ‘safe malling’
Leveling up your ‘lutong bahay’ with the kitchen companion you never knew you needed
MOST READ
LIST: What to expect in areas under GCQ, MGCQ
DOH explains: Only 109 of record-high 539 COVID-19 patients were ‘fresh cases’
Duterte approves Metro Manila’s shift to GCQ starting June 1
300 buses to resume operations in NCR by June 1 — Año
Don't miss out on the latest news and information.