Paris aims to give visitors to the 2024 Paris Olympics a flying start by offering airborne taxis to tournament sites straight from the airport.

Arrivals in the City of Light currently face an hour-long haul by train or bus into town from Charles de Gaulle airport to the north of Paris. 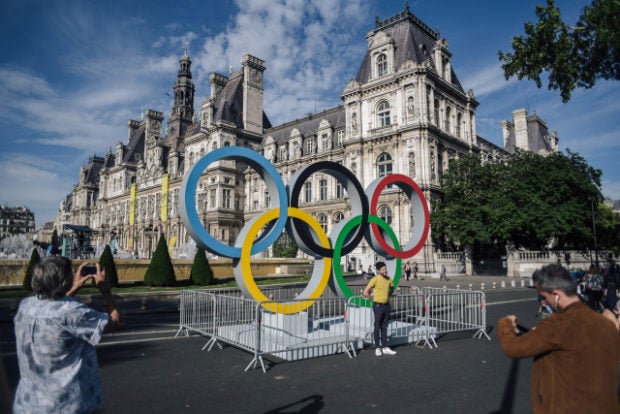 People pose in front of the Olympics rings installed in front of the Paris City Hall during the “Olympics Day” to celebrate the upcoming of the 2024 Paris Olympics Games. Image: AFP/Lucas Barioulet

But if Aeroports de Paris (ADP), Airbus and the Régie Autonome des Transports Parisiens (RATP) regional transport have their way, passengers, right after their jets have taxied to a halt on the runway, will be able to take to the air once again with a self-flying urban taxi of the future.

The firms used this past week’s Paris air show to say the Olympics afforded the perfect opportunity to bring into service futuristic Vertical Take-off and Landing (VTOL) machines, and that they would launch a feasibility study.

“In 2010, for the first time, more than half of humanity was living in urban zones and we think we shall surpass 60% by 2030,” said Airbus chief executive officer Guillaume Faury.

The time had now come to vault up to “the third dimension” of local commutes — air, he said.

“If we have the conviction that in the next five, 10, 15, 20 or 30 years low altitude is a space to be conquered we have to put in place the conditions today,” said ADP Group’s executive director general Edward Arkwright.

VTOL converts are already sprouting in number as the world looks to move beyond — or rather, above — today’s saturated motorways and growing environmental concerns.

Back on the ground, the view has been muddied by a delay beyond the Olympics, to 2025, of the express fast train designed to cut congestion and travel time between Charles de Gaulle airport and the city center.

ADP has until the end of the year to choose a site for a “Vertiport” capable of hosting taxis from one of 10 aerodromes in the region around Paris.

The idea is to have the venue ready in 18 months, requiring infrastructure investment of some 10 million euros ($11.3 million) (about P580 million), says Arkwright. He adds the project will test out the link “via an existing helicopter corridor.”

Ideally, the service would see the taxis take off every six minutes.

In order to make VTOL a reality by 2024, ADP is working alongside Airbus, which has for some years been involved in full electric propulsion urban mobility schemes.

The manufacturer already has two prototype models — the single-seater “Vahana” and the four-seater variant “CityAirbus”.

Faury explained that “the two projects will converge towards a vehicle that will respond to first cases of use.”

“This partnership is a unique opportunity to develop technological solutions, a product, a regulatory framework, an economic model,” Faury added.

“This project reduces constraints not only in terms of infrastructure but also concerning air traffic as it involves experimenting in a specific (air) corridor,” said Jean-Louis Rassineux, head of aeronautics and defense issues for Deloitte.

“It is large scale rollout which is going to be complicated,” Rassineux told Agence France-Presse.

Along with required progress on battery power and anti-collision detection, he said there were “constraints regarding compatibility and traffic regulation.”

But there is also the issue of the extent to which the concept will gain widespread public acceptance.

Rassineux warned there would need to be “security levels as stringent as those for air traffic” as well as “real value added to existing transport” systems.

Deloitte estimates the size of the airborne taxi market at some $17 billion (around P873 billion) for the United States alone through to 2040.

Yet “there remains some way to go before a flying vehicle becomes integrated into urban transport,” cautioned France’s transport minister, Elisabeth Borne.

Borne nonetheless sees moves towards creating an embryonic service in time for the 2024 games as “one of the important stages” towards “the emergence of a complete transport offering” which would be “integrated and which respects the environment.” RGA/JB