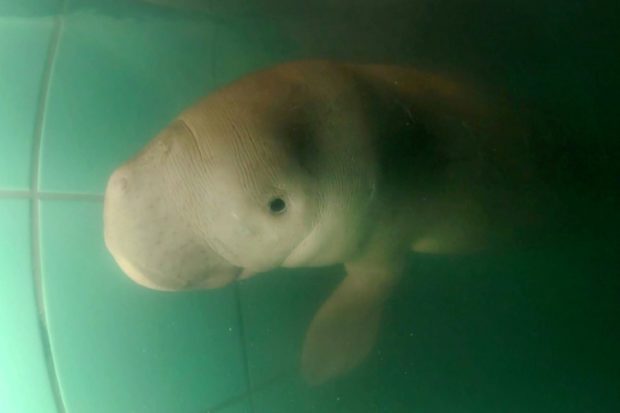 The newly named dugong “handsome prince of the sea,” recently washed ashore in Thailand, is now in rehabilitation. Image: Department of Marine and Coastal Resources via AFP

Southern Thailand’s waters are home to about 250 of the mammals, classified as vulnerable. A baby dubbed Mariam washed ashore on its beaches last month, sparking interest in ocean conservation.

The newly named dugong was found Monday, July 1, with scratches on its back and is now rehabilitating in a pool at the Phuket Marine Biological Centre.

The name “is from the Yawi language, and it means ‘handsome prince of the sea,'” the DMCR said.

Yawi is used in Thailand’s southernmost provinces and spoken by Muslim Malays.

The princess, who is a fashion designer, has taken “both dugongs… under her royal patronage,” the DMCR said.

It added she has set up “working teams for the conservation of Thailand’s sea and corals, to conserve rare and near-extinct marine animals.”

The dugong named Mariam has become a social media star with photos and videos of her being cradled, fed, and swimming going viral after her rescue last month.

The DMCR is now setting up a live stream of her in captivity.

Dugong beachings can be attributed to fishing and other human activities, said the Phuket Marine Biological Center. HM/JB