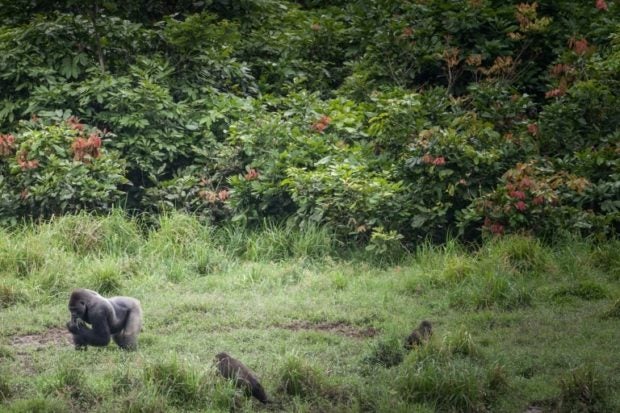 Gorillas form social bonds in a strikingly similar way to humans, including tiers of old friends and family members, according to a study released Wednesday, July 10, that may provide insight into how mankind evolved its social behavior.

Gorillas, which in the wild spend most of their time in dense forests making behavioral studies tricky for researchers, are known to form small family units comprising a dominant male and several females with offspring.

But a new analysis of data collected from years of social exchanges of hundreds of western lowland gorillas suggested the creatures are far more socially complex than previously thought.

A team of specialists looked at the frequency and length of each observed interaction between the animals when they gathered in clearing to feed on water plants.

They found that in addition to close family, the gorillas formed an “extended family” social tier comprising 13 individuals on average.

There were also wider groups, averaging 39 gorillas, where the animals consistently interacted with one another despite not being related.

“An analogy to early human populations might be a tribe or small settlement, like a village,” said Robin Morrison, a biological anthropologist at the University of Cambridge, who led the study.

In addition, the team uncovered hints of an even wider social tier, similar to an annual gathering or festivals in human societies, where dozens of gorillas would come together to eat fruit.

Morrison said the gorillas may have evolved these gathering skills to help maintain a “collective memory” for tracking down hard-to-find foodstuffs.

The tiered system of groups is surprisingly similar to those of humans, according to the authors of the research published in the journal Proceedings of the Royal Society B.

But several other animals display similar social skills, including baboons, whales and elephants.

“Our findings provide yet more evidence that these endangered animals are deeply intelligent and sophisticated, and that we humans are perhaps not quite as special as we might like to think,” Morrison said. HM