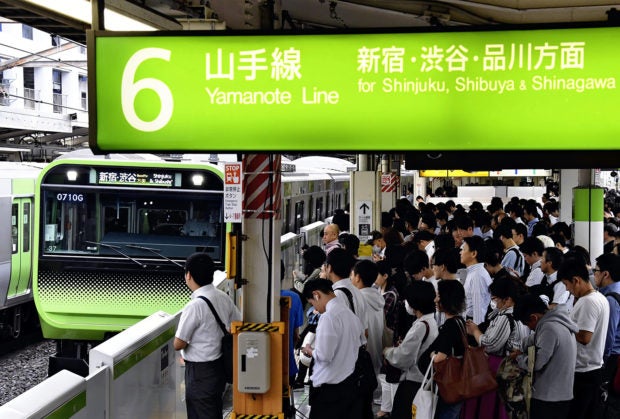 TOKYO —Japan railway companies are stepping up their efforts to beat the heat, in response to a series of passengers suffering heatstroke in trains and stations.

With the Tokyo Olympics and Paralympics set for next summer, railway companies operating in the Tokyo metropolitan area are using cutting-edge technology such as automatically turning up air conditioners near busy stations or adopting special window glass to shut out ultraviolet rays.

One morning in early July, the interior of a train on the JR Yamanote Line was hot and humid due to the mass of passengers. However, as the train approached Ikebukuro, one of Tokyo’s biggest terminal stations, it gradually became cooler.

The air conditioning in a train is usually set at a certain temperature. But starting three years ago East Japan Railway Co. (JR East) has used big data regarding the number of passengers in different times and zones to introduce train cars that automatically lower the temperature of air conditioners before trains arrive at busy stations where many people will get on.

The trains also choose the appropriate temperature based on the combined weight that passengers exert on the floor.

JR East and Seibu Railway Co. are using on some trains glass equipped with special metal and filters that absorb UV and infrared rays.

A spokesperson of Tokyo-based AGC Inc., one of the manufacturers of the glass, said, “The special materials can keep the sun and heat out, and avoid a rise in temperature within the trains.”

“More passengers become sick in crowded trains in summer because heat and odors stay inside the trains,” a railway official said.

According to the Tokyo Fire Department, 346 people were sent to the hospital from stations and trains with apparent heatstroke from June to September 2018, three times more than the previous year. The Fukuoka Fire Prevention Bureau reported 15 people, and the Nagoya City Fire Bureau reported 74 when the number of sufferers at bus terminals were included. The Osaka City Fire Department said ambulances were dispatched 89 times.

These numbers are all two to seven times the levels recorded in the previous year.

Heatstroke among passengers can also cause delays in train schedules. If trains stop between stations for a long time, more passengers may suffer health problems. Countermeasures against heat are crucial tasks for railway companies.

Keio Corp. has solicited opinions on its website about the temperatures in its trains, by asking passengers to evaluate the volume of air and temperatures of air conditioning in the trains they took by zone, time and boarding location, so as to utilize the feedback in its operations.

During the Tokyo Olympics and Paralympics next summer, stations near venues and major stations are expected to be greatly crowded. In July and August, JR East plans to set up a system at some stations on a trial basis in which people whose health condition has deteriorated can be diagnosed by videophone, under a partnership with hospitals in Tokyo.

The railway company also plans to station nurses at Sendagaya and Shinanomachi stations near the new National Stadium when the Jingu Gaien Fireworks Festival is held next month.

At a press conference on July 3, JR East President Yuji Fukasawa said, “We’ll thoroughly examine the effects and issues and make use of them during the Games.”

“Some people could develop symptoms of heatstroke, such as dizziness and nausea, even though they’re on trains not exposed to direct sunlight,” said Toshiki Mano, a professor at Chuo University who is also a physician well versed in heatstroke. “It’s necessary to drink fluids frequently when traveling, and take other measures such as changing to the next train depending on the congestion and one’s health condition.”

Infectious diseases specialist: ‘If I die and live again, I would choose the same profession’

Tootsy Angara bares neighbor wanted them out of village